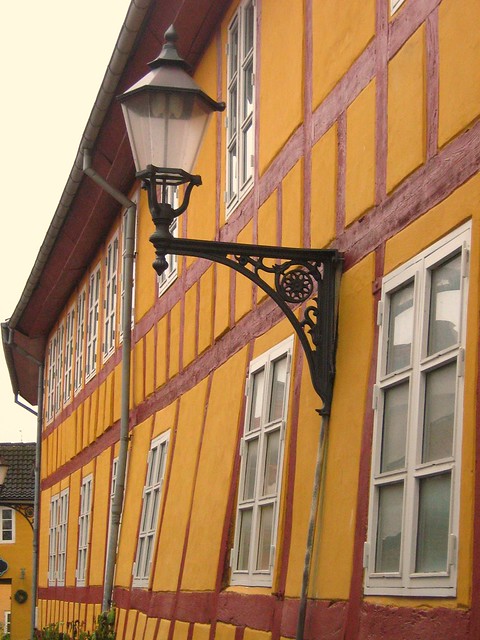 Aalborg is an industrial and university city in the North of Jutland, Denmark. As of 1 January 2014, it has a population of 130,853, making it the fourth most populous city in Denmark. With a population of 205,809, the Municipality of Aalborg is the third most populous in the country after Copenhagen and Aarhus. By road Aalborg is 64 kilometres southwest of Frederikshavn, and 118 kilometres north of Aarhus.

Printed dictionaries and other books with definitions for Aalborg

From a National to a Transnational Paradigm by Karen Risager

A fairly divergent language-culture nexus could be the following: a telephone conversation between an office employee at Berlin Zoo and an employee at Aalborg Zoo (Aalborg is a city in Northern Jutland in Denmark). The person talking in ...

A flight to Aalborg is a fine introduction to Jutland. After crossing the coastline the plane descends over a patchwork of fields and past the clustered houses of little villages, with an expanse of water gleaming in the distance. A county to delight ...

Aalborg is a city with about 100,000 citizens and Mou is a small town with about 1,100 citizens. The station has a sandy bottom with scattered eelgrass vegetation . Nivå Bugt is situated in the northern part of The Sound on the Danish side of the ...

Aalborg is a traditional manufacturing city, with a population of 200,000 and a track record of reinventing itself – having transitioned from postwar heavy engineering and shipbuilding industries to become a Scandinavian centre for electronics ...

Food Redistribution in the Nordic Region (2015)

Aalborg is a bigger city (107,000) located in northern Jutland. The biggest Danish cities of Copenhagen and Århus have been bypassed because it is already known that many food redistribution related activities take place here (e.g. the Food ...

Aalborg means Eel-Town, a name derived from the large number of eels found in the vicinity. Aalborg is the terminus of the railway from Teensburg to the north of Jutland, opened in 1865. AAR, the principal branch of the Rhine in Switzerland.

by Society for the diffusion of useful knowledge

Aalborg is a bishopric, and has a good academy or cathedral school founded in 1553. with some...

Often, spirits such as the popular Aalborg Akvavit, are consumed along with beer. Aalborg Akvavit (aqua vitae, “water of life”) is extremely popular and is probably the world's largestselling brand. This and other brands of akvavit are distilled in ...

The Aalborg architecture provides a method for computing marginals in a join tree representation of a belief net. It handles new data in a quick, flexible matter and is considered the architecture of choice for calculating marginals of factored ...

AALBORG, a city and seaport of Denmark, the seat of a bishop, and chief town of the amt (county) of its name, on the south bank of the Limfjord, which connects the North Sea and the Cattegat. Pop. (1901) 31,457. The situation is typical of the ...

Online dictionaries and encyclopedias with entries for Aalborg

See also the blanagrams of Aalborg!

Go to the usage examples of Aalborg to see it in context!