Definition of the noun achillea

What does achillea mean as a name of something?

Alternative definition of the noun achillea

Achillea a.k.a. Jens Gad is a songwriter, producer and guitarist. He was previously the co-producer for the musical project, Enigma. Currently, he is releasing albums under the name of Jens Gad Presents for his new instrumental work, and also under the name of Achillea, for his new world-influenced music which features different female vocalists on each album, singing in different languages. Jens is the older brother of Toby Gad.

View more phrases with the word Achillea in thesaurus!

Printed dictionaries and other books with definitions for Achillea

The Hot-house and Greenhouse Manual, or botanical cultivator ... Second edition (1826)

ACHILLEA is a numerous genus which belongs to the Compositae; its species succeed well in any common soil; the tall-growing kinds must be planted at some distance back in the bed or border, and the dwarfer species nearer the front.

Although Achillea is the one who is a real bladeswoman under any conditions. But those are skills we both prefer to keep well concealed.” “Aye. With ye it would ...

The Achillea is an excellent plant for use in cemetery lots. It is a very hardy plant, requiring but little care, a most astilbh japonica. profuse bloomer, a low spreading grower, and blooms through a large part of the season. Spiraea palmata is a ...

The genus Achillea is a very complex one with species in a polyploid ...

The best known achillea is the herb (or pasture weed, depending on how you look at it) yarrow (A. millefolium). Season of interest Achilleas flower from late spring until early autumn. Garden uses Achilleas are prime candidates for inclusion in ...

Harvest and Make Your Own Herbal Remedies by Julie Bruton-Seal, Matthew Seal

Achillea is an important diaphoretic herb, and is a standard remedy for helping the body deal with fever. It stimulates digestion and tones blood vessels. Hoffmann(2003)...

The Botanical Cultivator; Or, Instructions for the Management and Propagation of the Plants Cultivated in the Hothouses, Greenhouses, and Borders, in the Gardens of Great Britain (1821)

AcHILLEA is a numerous genus which belongs to the Corytnbiferae: its species succeed well in any common soil; the tall-growing kinds must be planted at some distance back in the bed or border, and the dwarfer species nearer the front.

A History by Beverly Seaton

Achillea is the emblem of war because it was frequently used to heal wounds. Generally, plants of use to humanity are given good connotations, while those useless or even harmful are given bad connotations. Poisonous plants such as the ...

Flavonoids of the Sunflower Family (Asteraceae) (2001)

Achillea is a Eurasian genus with some species in North Africa. The widespread A. millefolium is a naturalized weed in North America. A high degree of taxonomic and flavonoid interest in the group is revealed by finding flavonoid chemical ...

An Illustrated Monthly Magazine Devoted to the Home Beautiful

The achillea is a hardy perennial which bears double white flowers which strongly resemble miniature roses, in the greatest profusion all summer. It is a vigorous grower and will thrive in any situation or in any soil. While speaking of the ...

The Universal Gardener and Botanist; Or, A General Dictionary of Gardening and Botany, Etc (1778)

The Botanist's and Gardener's New Dictionary; in which is Also Comprised, A Gardener's Calendar ... and to which is Prefixed an Introduction to the Linnæan System of Botany (1763)

by James WHEELER (Gardener at Gloucester.)

The Botanist's and Gardener's New Dictionary (1763)

Containing the Names, Classes, Orders, Generic Characters, and Specific Distinctions of the Several Plants Cultivated in England, According to ... Linnaeus ... In which is Also Comprised, a Gardener's Calendar ... and to which is Prefixed, an Introduction to the Linnaean System of Botany ... by James Wheeler

ACHILLEA, the generical name of a plant called in English, Milfoil- Yarrow, and Nosebleed. - Characters. This is a genus of the order of the polygamia superflua, o belonging to the syngenesia class of plants; order z. of class XIX.

Or, Familiar Explanations of the Terms Used in All Arts and Sciences by George Crabb

Achillea moschata, called Musk Milfoil, is cultivated as food for cattle in Switzerland.

Achillea macrophylla, or sever... wileaved mofoil : leaves pinnate, pinnas gen-serrae, the outriott lar er and connected. It is a :*:ve of the Alps, is very hardy, thrives in almost any soil, but loves an oven exposure, ...

Online dictionaries and encyclopedias with entries for Achillea 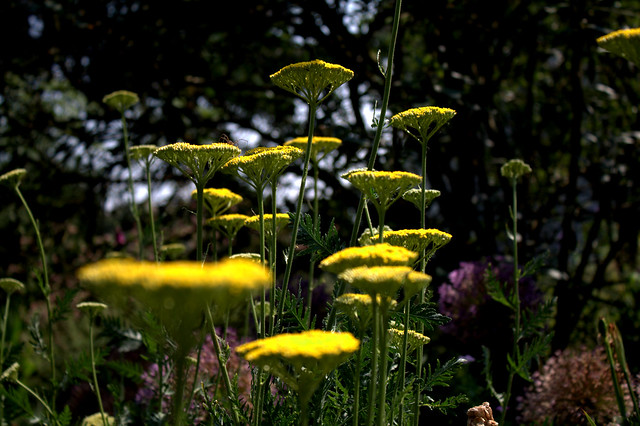 Video shows what achillea means. Any of various plants of the genus Achillea. Achillea Meaning. How to pronounce, definition audio dictionary. How to say ...

The value of this 8-letter word is 13 points. It is included in the second edition of the Official Scrabble Players Dictionary.