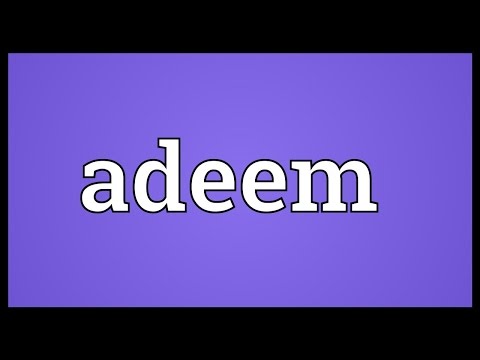 Definition of the verb Adeem

What does Adeem mean as a doing word?

Adeem: Adam Michael Arnone, better known by his stage name Adeem, is an independent American rapper from Keene, New Hampshire. Adeem is best known for his work in the hip hop group Glue and for winning the Scribble Jam Emcee Battle in 1998 and 2001.

Printed dictionaries and other books with definitions for Adeem

administrative law adeem O ademption: to eliminate a gift listed in a will (a legacy or a devise) because it no longer exists (e.g., the horse died), or because the conduct of the testator after making the will is interpreted as an intent to revoke the ...

Containing Full Definitions of the Prinicipal Terms of the Common and Civil Law, Together with Translations and Explanations of the Various Technical Phrases in Different Languages, Occurring in the Ancient and Modern Reports, and Standard Treatises; Embracing, Also, All the Principal Common and Civil Law Maxims. Compiled on the Basis of Spelman's Glossary, and Adapted to the Jurisprudence of the United States; with Copious Illustrations, Critical and Historical by Alexander Mansfield Burrill

ADEEM. [Lat. adimere, to take away.] To take away, take back, or revoke, as a legacy.

N adeem Ahmad, the commander of the Special Support Group, a branch of the Pak military charged with the responsibility of providing temporary buildings and some food for the displaced, “appeared to be sceptical that those aspects could ...

ADEMPTION (ADEEM) The revocation of the legacy written in a will through the later actions of a testator. See also: REVOCATION (REVOCABILITY OR REVOCATION OR REVOKE). ADEQUATE Sufficient. See also: JUSTIFICATION ( JUSTIFY ...

ADEEM. To take away, recall, or re voke. To satisfy a legacy by some gift or substituted disposition, made by the testator, in advance. See ADEMPTION. Given to. ADELANTADO ADELANTADO. In Spanish law. A governor of a province;

a work of universal reference in all departments of knowledge, with a new atlas of the world ... by William Dwight Whitney, Benjamin Eli Smith

Online dictionaries and encyclopedias with entries for Adeem

Video shows what adeem means. To revoke, as a legacy, grant, etc., or to satisfy it by some other gift.. adeem pronunciation. How to pronounce, definition by ...