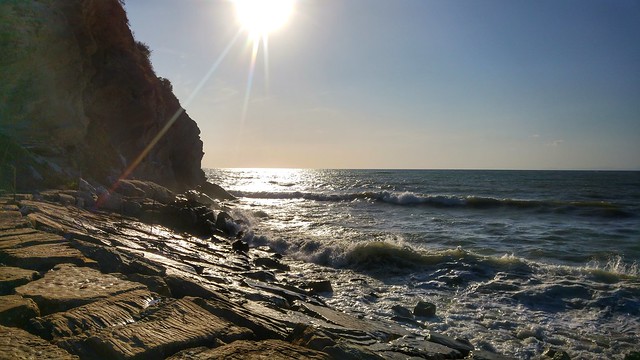 Agropoli is a town and comune located in the Cilento area of the province of Salerno, Campania, Italy. It is situated at the start of the Cilentan Coast, on the Tyrrhenian Sea. As of 2011, its population was of 20,610.

Printed dictionaries and other books with definitions for Agropoli

extending from Salerno to Agropoli, and watered by the rivers Silaro, Sarno, Calore, and Negro. e mountains are in general well wooded, and a number of them covered with chestnut-trees. The plains are rich in corn and rice; but the too extended cultivation of the latter has in several places made the climate unhealthy. The other products are wine, olive-oil, and fruit. Hogs are reared in great ...

The alluvial plain narrows southward to Agropoli, and a steep, high promontory then runs out to Punta Licosa. On its southern side, a wide beach at Asceo is backed by a dune ridge. The Campania peninsula rises to Monte Bulgheria, and is incised by the Alento valley. The river mouth is deflected southward, and there are sandy ridges on its southern side. The steep coast continues round to Policastro. There are several small seaside resorts, with problems of depleted beaches.

The London General Gazetteer, Or Geographical Dictionary; Containing a Description of the Various Countries, ... of the Known World, Etc (1825)

Its surface is for the most part mountainous, but it is traversed by a great plain, extending from Salerno to Agropoli, and watered by the rivers Silaro, Sarno , Calorc, ...

A universal gazetteer; or, Geographical dictionary of the world (1835)

Agropoli, a town of Italy, Naples, in Principato Citra, on the e side of the gulf of Salerno, 22 m sse Salerno. Aguii.ar, a town of Spain, province Navarre, ...

CAPACIO, a town of Naples, in the province of Principato Citra, the fee of a bishop, fuffragan of Salerno ; five miles north of Agropoli.

Online dictionaries and encyclopedias with entries for Agropoli