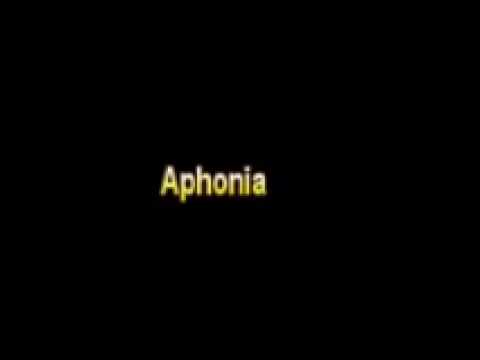 Definition of the noun aphonia

What does aphonia mean as a name of something?

Alternative definition of the noun aphonia

Aphonia is the inability to produce voice. It is considered more severe than dysphonia. A primary cause of aphonia is bilateral disruption of the recurrent laryngeal nerve, which supplies nearly all the muscles in the larynx. Damage to the nerve may be the result of surgery or a tumor.

Printed dictionaries and other books with definitions for Aphonia

Aphonia is the inability to produce voice. It is considered more severe than dysphonia. A primary cause of aphonia is ...

Applied Anatomy, Designed for the Use of Osteopathic Students and Practitioners (1906)

Aphonia is an effect of laryngeal disorder';.

A Compendious Medical Dictionary Containing an Explanation of the Terms (1801)

Amonia (Aphonia, ar,f. afwiiat, from or, priv. and sen, the voice). A suppression of the voice, without either syncope or coma. A genus of disease in the class locales , and order Jyfeinefia: of Cullen. When it takes place from a tumour of the ...

aphonia /āfō′′nē·ə/ [Gk, a, phone, without voice], a condition characterized by loss of the ability to produce normal speech sounds that results from ...

aphonia /āfō′′nē·ə/ [Gk, a, phone, without voice], a condition characterized by loss of the ability to produce normal speech sounds that results from ...

A dictionary of practical materia medica

Aphonia. Nephritis. (Esophagitis. Rheumatism. Sloughing. Thirst. Timidity. Ulcerations. Vomiting. Characteristics. — The symptoms of caustic ammonia closely resemble those of the carbonate. The caustic nature of the drug is exemplified in ...

The slightest as well as the less permanent aphonia often proceeds from functional disorder, especially from extreme nervousness, fright, fear, and hysteria ; but it also is frequently caused by catarrhal congestion of the mucous membrane of ...

aphonia. n. absence or loss of the voice caused by disease of the larynx or mouth or by disease of the nerves and muscles involved in the generation and articulation of speech. If loss of speech is due to a language defect in the cerebral ...

Aphonia. Loss of voice, usually sudden. Commonly caused by emotional stress with no detectable physical abnormality in the LARYNX. Damage or disease of the larynx usually results in dysphonia (partial voiceloss). Where no physical cause ...

A Dictionary of Medicine Including General Pathology, General Therapeutics, Hygiene, and the Diseases Peculiar to Women and Children (1884)

Online dictionaries and encyclopedias with entries for Aphonia

If you need images about Aphonia for an article or a report, you can download stock photos at a very small price:

See also the blanagrams of Aphonia!

Go to the thesaurus of Aphonia to find many related words and phrases!