Definition of the noun arachnida

What does arachnida mean as a name of something?

"Arachnida" is a lithograph by German naturalist Ernst Haeckel. This lithograph is from his book Kunstformen der Natur, which was first published in 1899.

Printed dictionaries and other books with definitions for Arachnida

The Encyclopedia of Medical and Veterinary Entomology (2013)

The Arachnida is a large and diverse class, containing several subclasses and orders of importance. 3.3.1 Subclass Acari (mites and ticks) The Acari are often small arthropods, varying widely in shape but in which the prosoma (anterior ...

Arachnida. Arachnida is the name of the class of Arthropoda to which belong the mange mites, ticks, and spiders. Arachidonic. Acid. (see EICOSANOIDS). Arachnoid. Membrane. Arachnoid membrane is one of the membranes covering the ...

Arachnida is a class of subphylum chelicerata. Characters of crustacia 1. All are aquatic. 2. Head contains two pairs of antennae (it is the distinguishing character) . 3.

The Radio Program with the Smartest Children in America, 1940-1953 by Martin A. Gardner

Arachnida is a class of arthropoda that includes spiders.11 The questions for the Kids were frequently relevant to a current event ...

ARACHNIDA (SPIDERS, SCORPIONS, TICKS) Arachnida is a large class of arthropods. These organisms usually have four pairs of legs and a body divided into ...

The arachnida differ from insects in having no antennae ; in the number ...

The micrographic dictionary; a guide to the examination of microscopic objects, by J.W. Griffith and A. Henfrey (1856)

ARACHNIDA. surface of the thallus, either immersed, superficial or elevated on peduncles. They contain the theee or spore-cases. For the structure, see Lichens. Fig. 28, Dirina Ceratonite, natural size. Fig. 2!J, several apothecia magnified ...

Arachnida. A class of terrestrial *arthropods of the phylum Chelicerata, comprising an estimated 100 000 species and including spiders, scorpions, harvestmen, ticks, and mites. An arachnid's body is divided into an anterior * cephalothorax ...

An Encyclopedia of Natural History

ARACHNIDA. (SPIDERS,. SCORPIONS,. AND. MITES). Thin rather extensive group of animals is generally recognisable by a few salient characters. The head and thorax, instead of being separated, as in insects, are usually fused together ...

by Paul A. Rees

Arachnida. A class of arthropods: spiders, mites and scorpions. arachnoid membrane The membrane that covers the brain. It contains.

ARACHNIDA, the name applied to the class of arthropods represented by the scorpion, spider and mite. The body is divided into two regions, the cephalothorax and abdomen, the head having been in embryonic life folded back over and fused ...

Arachnida. The class of Arthropoda to which belong the mange mites, ticks and spiders. Arachnoid. Membrane. Arachnoid membrane is one of the membranes covering the brain and spinal cord. (See BRAIN.) Arachnoiditis is inflammation of ...

The World-wide Encyclopedia and Gazetteer (1908)

Compiled and Revised to Date from the Leading Encyclopedias of the World. A Dictionary of Arts, Sciences and Literature, to which is Added Biographies of Living Subjects, One Hundred Colored Maps and Numerous Illustrations

ARACHNIDA. WI. Thelyphonidea. alo-thorax and abdomen, but where (as in some groups) the abdomen is divided into more or less distinct segments no organs of locomotion are ever attached to them; respiration, where distinct organs exist, ...

Online dictionaries and encyclopedias with entries for Arachnida 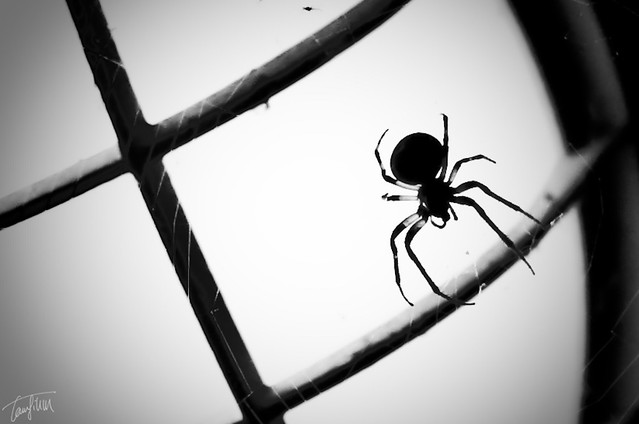 These little ones all around un-attended lights outside buildings and such..