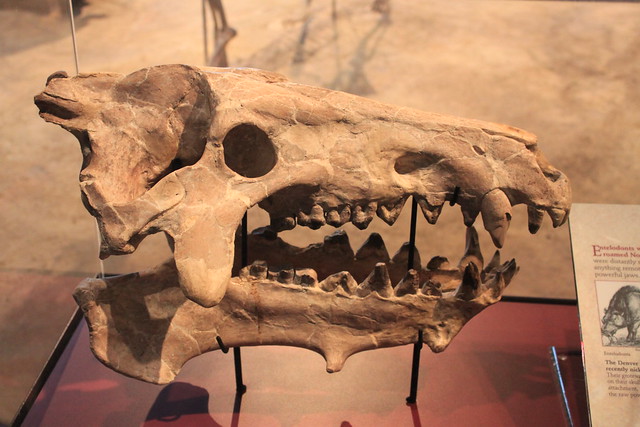 Definition of the noun Archaeotherium

What does Archaeotherium mean as a name of something?

Archaeotherium is a genus of Entelodontidae, described by Leidy in 1850.

Archaeotherium is a genus of Mammalia, described by von Huene in 1925.

Archaeotherium is an extinct genus of entelodont artiodactyl endemic to North America during the Eocene and Oligocene epochs, existing for approximately 6 million years. Archaeotherium was about 1.2m tall at the shoulder and around 2m long and weighing around 270kg.

Printed dictionaries and other books with definitions for Archaeotherium

Or, a Description of Remains of Extinct Mammalia and Chelonia, from the Mauvaises Terres of Nebraska by Joseph Leidy

Archaeotherium is a remarkable genus of suilline ungulata combining apparent ruminant and carnivorous characteristics. In the form of its superior molar teeth it ...

ARCHAEoTHERIUM is a remarkable genus of Pachydermata, which, as since ascertained by the inspection of a fragment of a face containing several true molares, in the possession of Dr. David D.

Archaeotherium (är'ké-Ö-thé'ri-um), n. . [NL., < Gr. apraioc, ancient, + 6mptov, wild beast.] One of several names which have been given to a genus of extinct swine, of the family Chaerootamidae, in which the last lower true molar as no third ...

Online dictionaries and encyclopedias with entries for Archaeotherium

The value of this 14-letter word is 24 points, but it's not an accepted word in the Official Scrabble Players Dictionary.