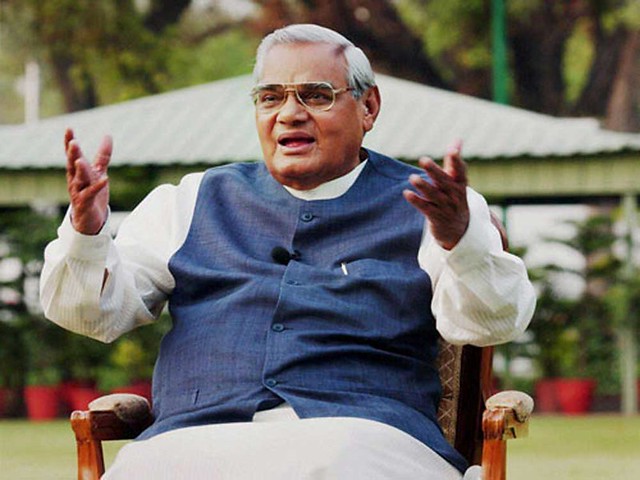 Atal
Bihari
Vajpayee
is an acrostic for abv.

Who is Atal Bihari Vajpayee?

Atal Bihari Vajpayee is an Indian statesman who was the eleventh Prime Minister of India, first for 13 days in 1996 and then from 1998 to 2004. A leader of the centre-right Bharatiya Janata Party, he is the first Prime Minister from outside the Indian National Congress party to serve a full five-year term.

Printed dictionaries and other books with definitions for Atal Bihari Vajpayee

by the staff of Congressional Quarterly,

parties, and itsfounder, Atal Bihari Vajpayee, a moderate, became prime minister. The BJP favors economic privatization and protection from foreign competition. It advocates astrong defenseand development of nuclear arms. In the spring of 1998, the.

In 1998, while inaugurating a large new Krishna temple in New Delhi, India's prime minister, Atal Bihari Vajpayee, praised ISKCON for its success in the “globalization of the message of the Bhagavad Gita.” Although some view ISKCON ...

Indian prime minister Atal Bihari Vajpayee signed a declaration on principles for relations and comprehensive cooperation between China and India that reiterated the Five Principles of Peaceful Coexistence. Among the issues dividing China and India are the latter's claim to sovereignty over the Himalayan kingdom of Sikkim, which borders China, and continued Indian sheltering of the Dalai Lama and the Karmapa Lama (the third most esteemed figure in Tibetan Buddhism), who in ...

Online dictionaries and encyclopedias with entries for Atal Bihari Vajpayee

The UN's unique legitimacy flows from a universal perception that it pursues a larger purpose than the interests of one country or a small group of countries. (Atal Bihari Vajpayee)
more quotes...