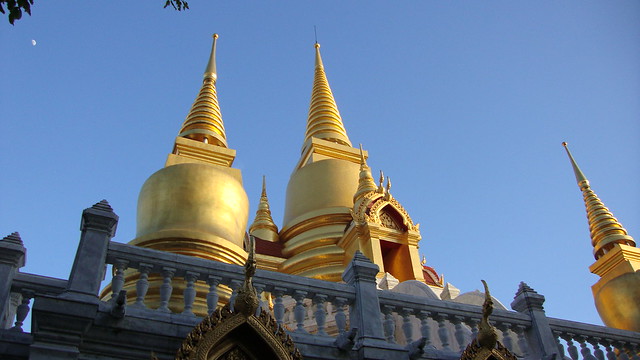 Bangkok is the capital and the most populous city of Thailand. It is known in Thai as Krung Thep Maha Nakhon or simply Krung Thep. The city occupies 1,568.7 square kilometres in the Chao Phraya River delta in Central Thailand, and has a population of over 8 million, or 12.6 percent of the country's population. Over 14 million people live within the surrounding Bangkok Metropolitan Region, making Bangkok an extreme primate city, dwarfing Thailand's other urban centres in terms of importance.

Printed encyclopedias and other books with definitions for bangkok

The Journal of the Manchester Geographical Society (1895)

Bangkok is a city where all the municipal arrangements are carried on by the princes, the king's brothers, who are placed over the public works departments. Many of them have been educated in Europe, and so introduce many European ...

Greatest Cities in the World You Should Visit (2006)

Handbook of Religion and the Asian City (2015)

Bangkok is a multiple site that is materially and socially complex, constructed historically and synchronically in relation to political-economic and cultural forces . In Lefebvre's terms (1996, 101), the city consists of “near order” functions—those ...

Into the Heart of the Golden Triangle by Christopher R. Cox

tems and'its pliable officials, freewheeling Bangkok is an ideal entrepOt. Routed to ethnic Chinese brokers linked to the Triads, the heroin leaves the capital on trains heading for Malaysia, planes bound for Taiwan or Hong Kong, and aboard ...

Issues in the Developing World by H. S. Geyer

Today Bangkok is a teeming and explosivelygrowing city ofsome eight million; the second city, Korat, has yet to reach 250,000. This primacy is echoed in economic statistics, andas far as trade is concerned Bangkok in the 1970s accountedfor ...

The design-led w Bangkok is a case in point and. 60.

Bangkok is a relatively young capital, established in 1782 after the Burmese sacked Ayutthaya, the former capital. A temporary base was set up on the western bank of the Chao Phraya River, in what is now Thonburi, before work started on the ...

BANGKOK is a sprawling metropolis known for its ornate shrines and vibrant street life. Situated in the Chao Phraya River delta region of central Thailand, the capital city has a population of around 14 million and exerts a significant impact ...

Getting Around Bangkok is a large city which is consistently hot and humid for most ofthe year – not the best place for those who prefer exploring a city on foot. Fortunately, Bangkok has an excellent local transport system comprising taxis, ...

The modern city Bangkok is a wonderful city to visit but not a place in which we would choose to live.However, close tonine million people call this home and endure the trafficchaos, noise and air pollution withno apparent complaint.

The Crown Encyclopedia and Gazetteer (1903)

A Reference Library of Universal Knowledge, Embracing Five Hundred Illustrations and Over Sixty-five Thousand Subjects, All Brought Down to the Date of Publication, with Ninety-six Colored Maps

Bandieoot Bangkok Bandicoot, the largest known species of rat, attaining the weight of two or three pounds, and the length, including the tail, of 24 to 30 inches. It is a native of India, and is very abundant in Ceylon. Its flesh is said to be delicate ...

With the abrupt change that accompanied the arrival of European art and architectural styles during the late 19th century, Bangkok of the 20th century emerged as an international city, emulating Western urban formation and leaving behind its ...

BANGKOK , or BANKOK, Siam, capital of the kingdom, extending for three or four miles on both sides of the Menam, which falls into the Gulf of Siam about 15 miles below.

who is who? Embraces over six thousand short biographies

Bandicoot Bangkok Bandicoot, the largest known specie* of rat, attaining the weight of two or three pounds, and the length, including the tail, of 24 to 30 inches. It is a native of India, and is very abundant in Ceylon. Its flesh is said to be delicate ...

Online dictionaries and encyclopedias with entries for bangkok

It's not like, I don't know, if Madonna has a new record out, then everybody from Bangkok to Birmingham knows what its called and can buy it the same week. But our stuff is not in that mass market. (Evan Parker)
more quotes about bangkok...