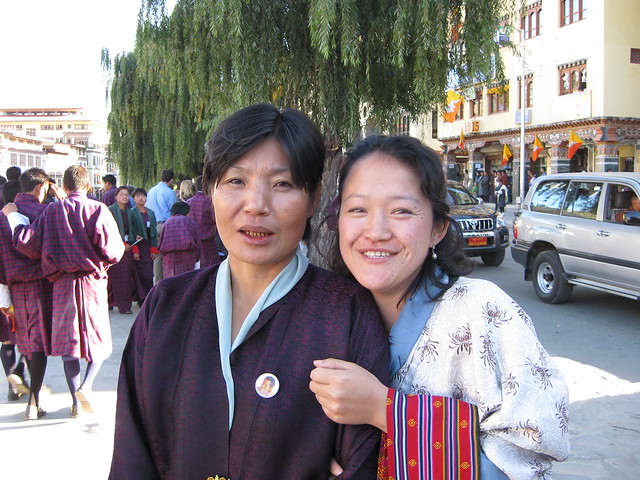 Bhutan, officially the Kingdom of Bhutan, is a landlocked country in South Asia located at the eastern end of the Himalayas. It is bordered to the north by China and to the south, east and west by India. To the west, it is separated from Nepal by the Indian state of Sikkim, while further south it is separated from Bangladesh by the Indian states of Assam and West Bengal. Bhutan's capital and largest city is Thimphu.

Bhutan is a 2006 theater production of the play by Daisy Foote.

Phrases starting with the word Bhutan:

Phrases ending with the word Bhutan:

Printed dictionaries and other books with definitions for Bhutan

BHUTAN IS AN ANCIENT KINGDOM SECLUDED HIGH IN THE HIMALAYAS WITH UNIQUE CUSTOMS AND PEOPLE...

Located in the heart of the high Himalayan mountain range, Bhutan is a land-locked country surrounded by mountains.

Bhutan is a Buddhist kingdom in the Himalaya Mountains between India and Tibet.

Bhutan is a small country located on the southern slopes of the eastern Himalayas. It is a landlocked country sandwiched between Tibet (China) on the north and the Indian States of Assam, Arunachal Pradesh, Sikkim and West Bengal on the ...

Bhutan is an independent state lying in the Eastern Himalayas, with British India as a southern boundary and Thibet as a northern and eastern boundary. The two ruling authorities are the Deb Rajah, who is the temporal head of the state and ...

Bhutan is a pilot case in the Enhancing Financial Sector Surveillance (EFSS) in Low-Income Countries initiative (see supplement III). The findings of an MCM- World Bank mission in September 2013 are included as a supplement to this ...

Capacity Development in Irrigation and Drainage (2004)

Bhutan is a relatively small country and so the numbers of people involved were considerably smaller than in most other countries. Smallholders operate relatively independently of government on a day-to-day basis but have relied heavily in ...

Throughout Bhutan, stupas and chortens line the roadside commemorating places where Guru Rinpoche or another high Lama may have stopped to meditate. Prayer flags dot the hills, fluttering in the wind. They allow Bhutanese people to ...

A landlocked country located in the East Himalayan mountains of central Asia, Bhutan is bounded to the north by the Tibetan region of China, and to the south, east and west by India. The country, which spans an area of roughly ...

CHILD ABUSE AND NEGLECT Bhutan was one of the first countries to ratify the Convention of the Rights of the Child in 1990. It did not sign the optional protocols on the sale of children, child prostitution, child pornography, and children in ...

Bhutan is a relatively small country with a total population of 1.78 million (1995 estimate). The majority of the...

India's North-East, located in the extreme north-eastern corner of the Sub- Continent, shares international frontiers on its North, East and South with four nations — Bhutan, China (Tibet), Myanmar and Bangladesh and is connected to the rest of ...

A species of horse, which seems indigenous to Bhutan, and is used as a domestic animal, is called tdngan, ...

A Dictionary of Arts, Sciences, and General Literature. Ath - Boi

A species of horse, which seems indigenous to Bhutan, and is used as a domestic animal, is called tângan, ...

Online dictionaries and encyclopedias with entries for Bhutan

Couldn't select: You have an error in your SQL syntax; check the manual that corresponds to your MariaDB server version for the right syntax to use near 'Bhutan"" IN BOOLEAN MODE) LIMIT 1,1' at line 1