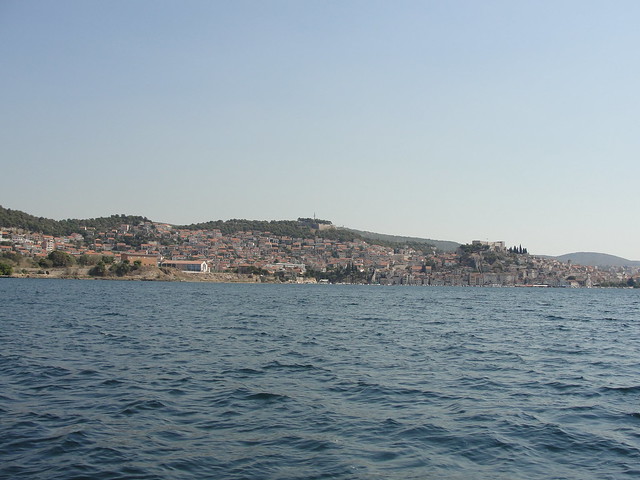 Croatia, officially the Republic of Croatia, is a unitary democratic parliamentary republic at the crossroads of Central Europe, Southeast Europe, and the Mediterranean. Its capital city is Zagreb, which forms one of the country's primary subdivisions, along with the twenty counties. Croatia covers 56,594 square kilometres and has diverse, mostly continental and Mediterranean climates. Croatia's Adriatic Sea coast contains more than a thousand islands. The country's population is 4.28 million, most of whom are Croats, with the most common religious denomination being Roman Catholicism.

Croatia a.k.a. Croatia Airlines d.d. is the government-owned national airline and flag carrier of the Republic of Croatia. Based in Buzin, Zagreb, the airline is a member of Star Alliance and operates domestic and international services. Its main base is Zagreb Airport, with focus cities being Dubrovnik, Split, and Zadar.

Croatia a.k.a. The Croatia national football team represents Croatia in international football. The team is controlled by the Croatian Football Federation, the governing body for football in the country. A FIFA-recognised national side had previously represented the short-lived Banovina of Croatia and Independent State of Croatia in nineteen friendly matches between 1940 and 1944. This team was dissolved in 1945 as Croatia became a constituent federal republic of SFR Yugoslavia. In the period between 1945 and 1990, Croatia did not field a separate team for competitive matches and Croatian players played for the Yugoslavia national football team.

Printed encyclopedias and other books with definitions for Croatia

Hidden Champions in CEE and Turkey (2013)

Carving Out a Global Niche by Peter McKiernan, Danica Purg

Croatia is a strong democracy with a market economy, but has significant state involvement in a number of industries, and carries a considerable public financial burden from its social welfare policies. Croatia is a developing economy and, ...

Croatia is a unitary democratic parliamentary republic in Europe at the crossroads of Central Europe, the Balkans, and the Mediterranean.

in the subterranean caves that honeycomb the karstic landscape, or scuba diving off Vis, Croatia is an ideal venue.

Key point 2 Despite its relatively small population,Croatia is a varied country.The Dalmatian coast differs from the Pannonian plain not just in geography, but also in business culture, business opportunities, political orientation, etc. Of course ...

Croatia is a country in Central Europe and Southeastern Europe at the crossroads of the Pannonian Plain, the Balkans, and the Adriatic Sea. Its capital and largest city is Zagreb. Croatia borders Slovenia to the north, Hungary to the northeast, ...

Croatia and the European Union (2015)

Croatia is a member of all relevant international security institutions and started to participate in peace support operations in September 1999.2 For the last 13 years members of the Croatian armed Forces (CaF) have participated in more than ...

A European Perspective by E. Psychogiopoulou

Croatia is a South East European country of about 4.5 million inhabitants thatgained itsindependence through thedissolution of Yugoslavia in 1990.The democratic transformation of the country was slowed down and was rendered more ...

Croatia is a fairly advanced economy already and probably will be able to integrate into the EU almost as smoothly as Slovenia did. Turkey and the Ukraine are looking at a longer, trickier process. Money market trends In 2007 the uncertainty ...

Croatia is an increasingly versatile destination for adventure tourism, with numerous outdoor activities on offer, from hiking in the hills of the interior to scuba-diving in the Adriatic. Sailing is best organized before you arrive. Croatian team and ...

Croatia (Croat.: Hrvatska; Turk.: Hırvatistan) Today, Croatia is a state in southeastern Europe or in the western Balkans, with Zagreb as its capital. Its territory is about 22,000 square miles (55,000 square km), and the country has slightly more ...

This federation disintegrated into civil warin 1991 with declarations of independence by Sloveniaand Croatia. These republics, and Bosnia- Herzegovina, were recognized as independent countries bythe United Nationsin1992. From the ...

Online dictionaries and encyclopedias with entries for Croatia

Croatia did not want Europe to be divided as to the start of Croatia's EU entry talks. (Stjepan Mesic)
more quotes about croatia...