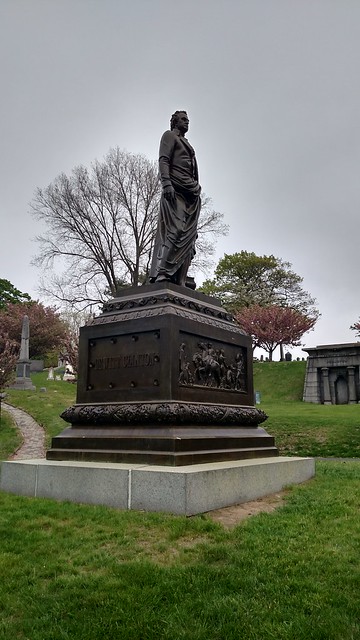 Definition of the noun dewitt clinton

What does dewitt clinton mean as a name of something?

Who is DeWitt Clinton?

DeWitt Clinton was an early American politician and naturalist who served as a United States Senator and was the sixth Governor of New York. In this last capacity, he was largely responsible for the construction of the Erie Canal. Clinton was the leader of New York's People’s Party and was a major rival of Martin Van Buren, who was the Attorney General of New York during Clinton's governorship. Clinton believed that infrastructure improvements could transform American life, drive economic growth, and encourage political participation, and he heavily influenced the development of the New York State and the United States.

The DeWitt Clinton of the Mohawk and Hudson Railroad was the first steam locomotive to operate in the state of New York and the fourth built in the United States.

Printed dictionaries and other books with definitions for DeWitt Clinton

A Dictionary of American Politics (1892)

Comprising Accounts of Political Parties, Measures and Men, and Explanations of the Constitution, Divisions and Practical Workings of the Government, Together with Political Phrases, Familiar Names of Persons and Places, Noteworthy Sayings, Etc., Etc by Everit Brown, Albert Strauss

A split among the Clintonians now threw DeWitt Clinton and the Federalists still more closely together, but in ...

The town, which was incorporated in June of 1852, was named in honor of DeWitt Clinton, governor of New York, who had proposed building a canal from the mouth of the Portage River to the Ohio River at Cincinnati. Port Clinton has served ...

was named after DeWitt Clinton, who built the Erie Canal and served as governor of New York. Clinton is the county seat. (137, 163) Crawford County (1851) was named after a noted politician, William Clinton ...

DeWitt Clinton. The county seat is Albany. The county's topography is predominantly hilly with level, ...

Encyclopedia of the History of St. Louis (1899)

A Compendium of History and Biography for Ready Reference by William Hyde, Howard Louis Conard

Online dictionaries and encyclopedias with entries for DeWitt Clinton

Pleasure is a shadow, wealth is vanity, and power a pageant; but knowledge is ecstatic in enjoyment, perennial in frame, unlimited in space and indefinite in duration. (DeWitt Clinton)
more quotes...

Go to the usage examples of DeWitt Clinton to see it in context!