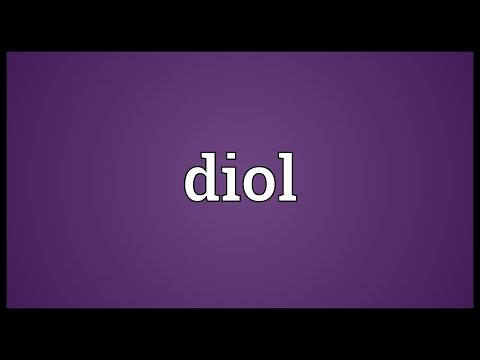 Definition of the noun diol

What does diol mean as a name of something?

Diol is a fictional character from the 1996 film Slayers: The Book of Spells.

Diol: A diol is a chemical compound containing two hydroxyl groups. This pairing of functional groups is pervasive and many subcategories have been identified. The most common industrial diol is ethylene glycol. Examples of diols in which the hydroxyl functional groups are more widely separated include 1,4-butanediol HO—₄—OH and bisphenol A, and propylene-1,3-diol or beta propylene glycol, HO-CH₂-CH₂-CH₂-OH.

Printed dictionaries and other books with definitions for Diol

For example, the biphenol diol is a monomer in Union Carbide's polymer Radelo and GE's engineering polymer Ultem II*. The organism Aspergillus parasiticus catalyzes the specific conversion of biphenyl to 4,4'-dihydroxybiphenyl in a ...

The compound is sometimes called αpropylene glycol to distinguish it from the isomer propane1,3diol (βpropylene glycol). A diol is a chemical compound containing two hydroxyl groups. This pairing of functional groups is pervasive and many ...

A diol is a chemical compound containing two hydroxyl groups. This pairing of functional groups is pervasive and ...

Morphogenesis, Molting and Metamorphosis by Lawrence I. Gilbert

Analysis of the kcat/Km parameter for the diols of JHI, II, and III indicates that JHI diol is the preferred substrate, suggesting a preference for an ethyl group at the C7 position. JHDK requires both Mg2+ and ATP for activity (Grieneisen et al., ...

Online dictionaries and encyclopedias with entries for Diol