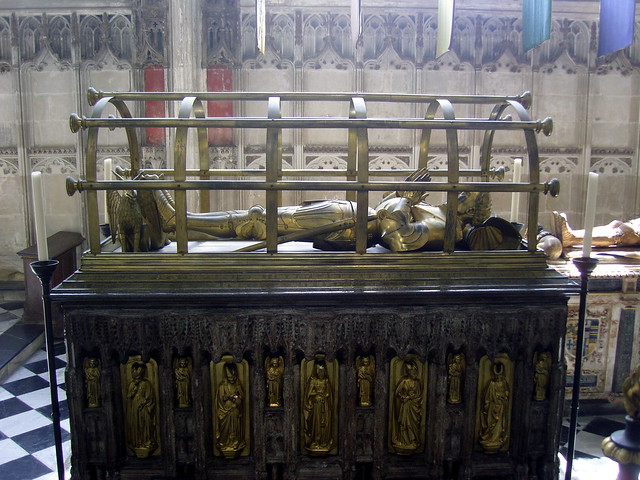 Definition of the noun earl of warwick

What does earl of warwick mean as a name of something?

Earl of Warwick is a title that has been created four times in British history and is one of the most prestigious titles in the peerages of the United Kingdom. The first creation came in 1088. The 14th Earl was created Duke of Warwick in 1445, a title which became extinct on his early death the following year. The most well-known Earl of this creation was the 16th Earl, who was involved in the deposition of two kings, a fact which later earned him his epithet "Warwick the Kingmaker". This creation became extinct on the death of the 17th Earl in 1499. The title was revived in 1547 for the powerful statesman John Dudley, 1st Viscount Lisle, who was later made Duke of Northumberland. The earldom was passed on during his lifetime to his eldest son, John, but both father and son were attainted in 1554. The title was recreated or restored in 1561 in favour of Ambrose, younger son of the Duke of Northumberland. However, Ambrose was childless and the earldom became extinct on his death in 1590. It was created for a third time in 1618 for Robert Rich, 3rd Baron Rich, in spite of the fact that the Rich family were not in possession of Warwick Castle.

Printed dictionaries and other books with definitions for Earl of Warwick

ln l640 a friend complained to Archbishop Laud, 'The Earl of Warwick is the temporal head of the Puritans, and the ...

A Novel by Philippa Gregory

The Earl of Warwick is the new ...

A General and Heraldic Dictionary of the Peerages of England, Ireland, and Scotland, Extinct, Dormant, and in Abeyance

by hie eideet eon, ROBERT RICH, third Earl of Warwick, who we! Inadea Knight ofthe Beth at the coronation of King ...

Encyclopedia of the Hundred Years War (2006)

by John A. Wagner

BEAUCHAMP, THOMAS, EARL OF WARWICK 1415, but was then ordered to convey prisoners to Calais and so missed the Battle of AGINCOURT. The earl participated in the conquest of NORMANDY after 1417, including the sieges of Caen ...

A London Encyclopaedia, Or Universal Dictionary of Science, Art, Literature and Practical Mechanics (1829)

Comprising a Popular View of the Present State of Knowledge : Illustrated by Numerous Engravings, a General Atlas, and Appropriate Diagrams by Thomas Curtis

Over the Avon is an elegant stone bridge of one arch, erected at the expense of the earl of Warwick. On the northern bank of the river stands the castle, on the solid rock, 100 feet higher than the level of the Avon, but on the north side it is even ...

Online dictionaries and encyclopedias with entries for Earl of Warwick

Photo about Earl of Warwick