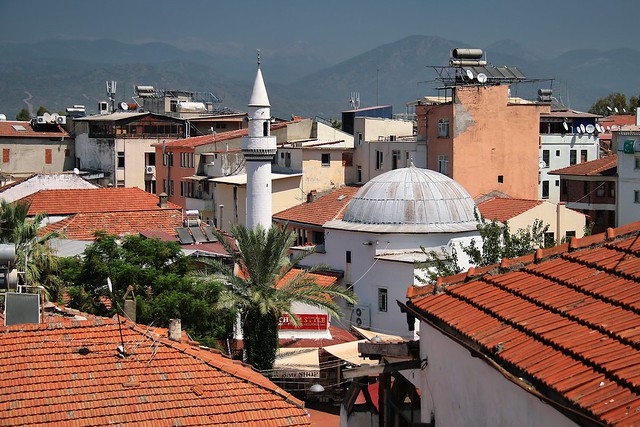 Fethiye is a city and district of Muğla Province in the Aegean region of Turkey with about 68,000 inhabitants.

Printed dictionaries and other books with definitions for Fethiye

by Group of authors

Fethiye is a tourism destination where food and beverages businesses are widespread and they are easy for the researchers to access physically and legally. The primary data are collected from business owners through semi- structured questionnaires. As Glaser and Strauss (1967) stated, since the subject is not studied previously often and it is not possible to draw a strong theoretical frame; the sample size is decided through theoretical sampling approach (Kish, 1965:17, Miaoulis ...

Fethiye *** Fethiye is a bustling shopping centre with some good restaurants, but the town itself is in fact rather ordinary. Serious holiday-makers prefer to head 20km (12 miles) down the coast to Oliideniz. Oliideniz *** Visitors lament the results of overenthusiastic tourism in Oliideniz ('dead sea' in Turkish) but the steep mountain "Si road and drop down to the beautiful lagoon still make. 82 THE MEDITERRANEAN COAST.

In the west, Fethiye is a perfect base for visits to Ölüdeniz, Kaya Köyü and Butterfly Valley. The scenery becomes increasingly spectacular as you head towards the site of Olympos, and Kaş, which offers great scuba diving, before reaching the port and major city ...

The Dolmabahce Palace, where sulta_ns lived from the 19th century onward; the Kariye, Fethiye and Imrahor Mosques; the Hagia Sophia [St. Sophia] in Istanbul; the Yesil Turbe [the Green Tomb]; and the Muradiye Kulliyesi in Bursa are the most notable examples of these. Meanwhile, the ruins of many ancient cities and settlements, including Aphrodisias, Aspendos, Bergama, Bogazkoy, Ephesus, Goreme, Karatepe, and Perge, have been organized as open-air museums. See also ...

to Fethiye on the southwestern coast of Anatolia. Deniz Kitabı, drawn by cartographer Seyyid Nuh, dates from 1648–50 and includes 204 nautical charts of the Black Sea and Mediterranean ports, including defensive structure such as castles.

Online dictionaries and encyclopedias with entries for Fethiye

The value of this 7-letter word is 16 points, but it's not an accepted word in the Official Scrabble Players Dictionary.