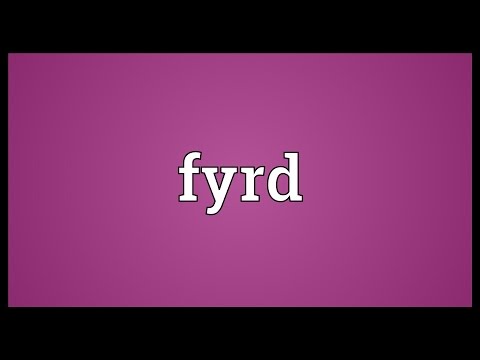 The fyrd, in early Anglo-Saxon times, was an army that was mobilized from freemen to defend their shire, or from select representatives to join a royal expedition. Service in the fyrd was usually of short duration and participants were expected to provide their own arms and provisions. The composition of the fyrd evolved over the years, particularly as a reaction to raids and invasions by the Vikings. The system of defence and conscription was reorganised during the reign of Alfred the Great, who set up 33 fortified towns in his kingdom of Wessex. The amount of taxation required to maintain each town was laid down in a document known as the Burghal Hidage. Each lord had his individual holding of land assessed in hides. Based on his land holding, he had to contribute men and arms to maintain and defend the burhs. Non compliance of this requirement could lead to severe penalties.

Printed dictionaries and other books with definitions for Fyrd

The History of the Norman Conquest of England (1870)

Its Causes and Its Results

The Dictionary of English History (1910)

Fyrd was the national militia of ...

A Dictionary of Arts, Sciences, Literature and General Information

FYRD, the name given to the English army, or militia, during the Anglo-Saxon period (see ARMY, 60). It is first mentioned in the Anglo-S axon Chronicle under the date 605.The ealdorman, or sherifi, of the shire was probably charged with the ...

Online dictionaries and encyclopedias with entries for Fyrd

Video shows what fyrd means. In early Anglo-Saxon times, an army that was mobilized from freemen to defend their shire, or from select representatives to join a ...

See also the blanagrams of Fyrd!

Go to the pronunciation of Fyrd to learn how to say it correctly!