Gallop appears in the following palindrome (phrase that reads the same backward as forward):

Gallop is sometimes a misspelling of galloped.

The word gallop is considered to be an easy one, according to the Dale-Chall word list, which includes 3000 words that all fourth-grade American students should know and understand.

Definition of the noun gallop

What does gallop mean as a name of something?

Specialised definition of the noun gallop

a horse's fastest gait, in which all four feet are off the ground at the same time (2005. Chambers Sports Factfinder. Chambers Harrap Publishers Ltd)

the horse's fastest gait, in which all four feet are off the ground simultaneously

Definition of the verb gallop

What does gallop mean as a doing word?

Alternative definition of the verb gallop

Printed dictionaries and other books with definitions for Gallop

An atrial gallop is a sign associated with cardiomyopathy, regardless of the type —dilated (most common), hypertrophic, or restrictive (least common). Additional findings may include dyspnea, orthopnea, crackles, fatigue, syncope, chest pain, ...

A gallop is a diastolic filling sound, which is an extra heart sound usually identified as an S3 or S4. The sounds occur in sequence with the usual S1, S2, followed by S3 and/or S4 occurring in diastole, with S3 occurring early in diastole ...

Gallop The gallop is the fastest gait. If fast enough, it's a four-beat gait, with each hoof landing separately: right hind hoof, left hind hoof just before right fore hoof, left fore hoof. Other gaits come naturally to certain breeds or are developed.

A gallop is an extra heart sound (S3 or S4), common in HF. Murmurs are caused by turbulent blood flow. Murmurs are described according to location, timing within cardiac cycle, intensity, pitch, quality, and duration. Clicks reflect abnormal ...

Palpable S3 gallop is the early diastolic rapid filling spike, after the apical impulse. The hemodynamic correlate of the ...

Considered with Reference to Natural Theology by Peter Mark Roget

A gallop is a continued succession of longer k'a| » made by the two hind feet in conjunction. In this case, the centre of gravity is lifted higher from the ground, and is projected in a wide arch, and with great velocity. In the amble, both the legs on ...

by Willem Back, Hilary M. Clayton

The gallop is an asymmetrical gait in which the footfalls of both the fore and hind limbs occur as couplets, with an aerial (suspension) phase following lift-off of the leading forelimb. The transition from a slow speed canter to the ...

Gallop is the most common type of the fast gaits of many mammals (Drawing 11). Gallop is produced by intensive work of each limb. The general scheme is so: 1) after pushing off by hind limbs follows the outstretched-airborne stage, which ...

The only exception isthatof the Neapolitan Mastiff whichstates that the normal gaits are the walk, trot, gallop and pace.Gaitsarealso identified by the sequenceoffootfalls, the rhythm of footfalls and the number ofsupport paws inone stageof one ...

gallop. Cardiology Cardiac auscultatory phenomena cvharacterized by a tripling or quadrupling of heart sounds, likened to a horse's canter; gallops may be the first sign of cardiac disease, but are often unrecognized, misinterpreted or ignored; ...

Online dictionaries and encyclopedias with entries for Gallop

Distribution of usage frequency for the most common synonyms of the verb gallop: 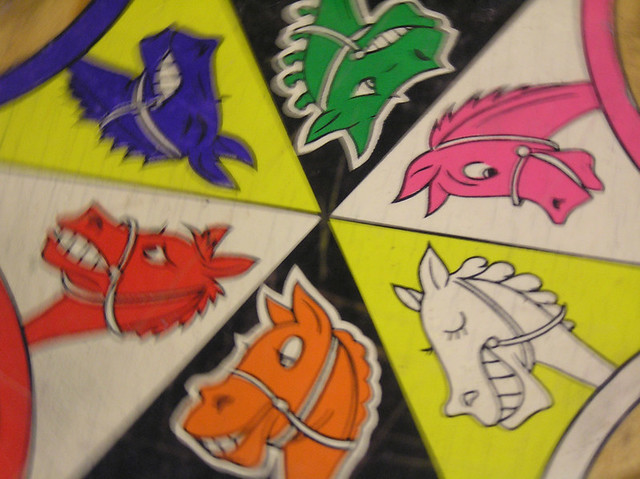 Money makes the horse gallop whether he has shoes or not.
more quotes about gallop...