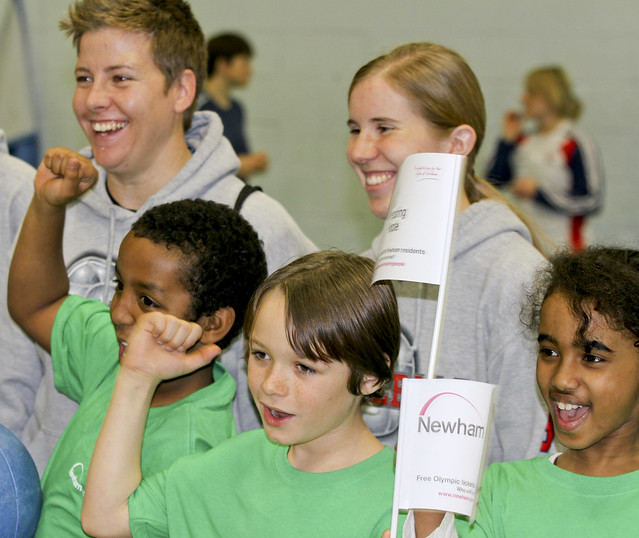 Definition of the noun Goalball

What does Goalball mean as a name of something?

Specialised definition of the noun Goalball

a game developed for athletes with visual impairments, played using a ball with bells inside that can be tracked by the sound it makes (2006. Dictionary of Sport and Exercise Science. A&C Black Publishers Ltd)

Goalball is a team sport designed specifically for blind athletes, originally devised in 1946 by the Austrian Hanz Lorenzen and German Sepp Reindle as a means of assisting the rehabilitation of visually impaired World War II veterans. Participants compete in teams of three, and try to throw a ball that has bells embedded in it into the opponents' goal. Teams alternate throwing or rolling the ball from one end of the playing area to the other, and players remain in the area of their own goal in both defence and attack. Players must use the sound of the bell to judge the position and movement of the ball. Games consist of two 12-minute halves. Eyeshades allow partially sighted players to compete on an equal footing with blind players. Eyepatches may be worn under eyeshades to ensure complete coverage of the eye, and prevent any vision should the eyeshades become dislodged.

Printed dictionaries and other books with definitions for Goalball

Equity and Inclusion in Physical Education and Sport (2012)

Goalball is a 3-a-side game developed for visually-impaired people; sighted players can join in as everyone wears adapted goggles. This is an example of reverse inclusion where sighted people can be included in a disability-specific game. It is important to consider how these activities can be developed further. One possibility could be an inter-school competition or perhaps establishing a lunchtime or after school club. Although these activities may go some way to addressing ...

Equity and Inclusion in Physical Education (2004)

Goalball is a three-a-side game developed for visually impaired people; sighted players can join in as everyone wears adapted goggles. This is an example of reverse inclusion where sighted people can be included in a disability- specific game. It is important to consider how these activities can be developed further.

Physical Therapies in Sport and Exercise (2007)

Goalball is a sport designed to be played by athletes with a visual impairment. Two teams of six players compete, with only three from each team allowed on the court at ...

Goalball is a team sport designed for blind athletes, originally developed as a means to rehabilitate visually impaired World War II veterans. Opposing teams try to throw a ball with bells embedded in it into the opponents' goal. The sport evolved over the decades following and has been part of the Paralympics since 1980. For more information about the LightHouse in San Francisco, visit its website at www.lighthouse-sf.org. OPERA PARALLELE OF SAN FRANCISCO In 2006, the San ...

Encyclopedia of Sports & Recreation for People with Visual Impairments (2012)

Goalball is a fast-paced, three-on-three indoor team sport in which players try to score goals by rolling a bell-filled ball past the opposing team's defense. It is a strategic game, one of passes and positioning where shots hurled at 30 mile per hour and spinning, off-speed throws send defenders diving to block the ball, with nothing but sound to plot its path. Like a basketball's swish or the crack of a bat in baseball, goalball makes its own music. “The sound of the ball hitting the back of the ...

Goalball is a sport that is specifically designed for blind athletes to compete in a team environment where they attempt to roll or throw into the opponent«s goal. Goalball is made up of two teams of three players each. The game is played in a gymnasium or on a court that measures 18m x 9m, with goals at each end that are 9m wide x 1.3m high. Teams alternate throwing or rolling the ball from one end of the area towards the opponents« goal. Bells located within the ball create noise as ...

The Effective Teacher's Guide to Sensory Impairment and Physical Disability (2006)

From Ancient Times to the Present by David Levinson, Karen Christensen

and 4 that are unique to the Paralympic Games (boccia, goalball, powerlifting, and wheelchair rugby.) Both the Olympic and the Paralympic Games will be held at the same venues, which are being equipped with the facilities necessary for the accommodation of disabled athletes ...

goalball n. a game for visually impaired players, played with a large ...

goalball 7noun [mass noun] a ball game for blind and visually impaired players, played by teams of three. The object is to ...

Online dictionaries and encyclopedias with entries for Goalball

Video shows what goalball means. A ball game, designed for the blind, in which teams of three players attempt to throw a ball with bells embedded in it into the ...

Go to the usage examples of Goalball to see it in context!