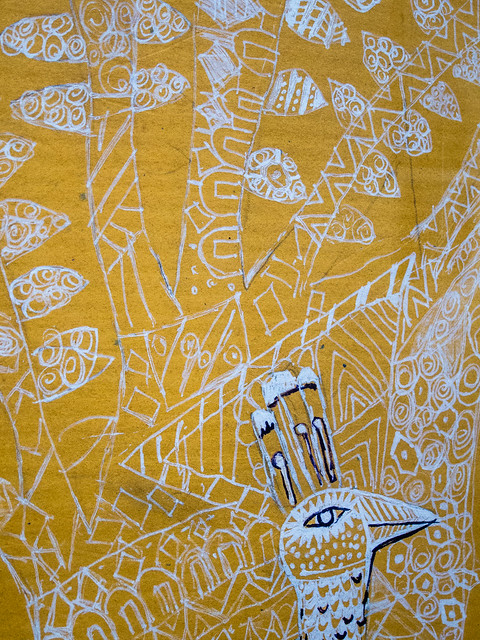 Gond is sometimes a misspelling of again.

Definition of the noun gond

What does gond mean as a name of something?

Gond is a fictional deity in the Forgotten Realms campaign setting for the Dungeons & Dragons fantasy role-playing game. Gond is the deity of invention: he transforms ideas into form and inspires mortals to create new things. He cares only for the act of creation and pays no heed to the consequences of his inventions. While humans know him as Gond, some gnomes who worship him know him as Nebelun. An aspect of Gond is worshipped in Durpar, Estagund, and Var the Golden, where he is called Zionil. Worshippers of Gond are known as Gondar.

Gond: This is an India musical raga that appears in the Sikh tradition from northern India and is part of the Guru Granth Sahib. Every raga has a strict set of rules which govern the number of notes that can be used; which notes can be used; and their interplay that has to be adhered to for the composition of a tune.

Printed dictionaries and other books with definitions for Gond

The word Gond is an imposition of the Hindus and Mohmedans (Page No. 31, Tribals Economy in...

The name Gond is an imposition by Hindu and Muslims. (K L Bowmilk - Tribal India - Page ...

Se'gond is a man of fifty, with waxy complexion ...

Gond is an ancient tribe of Central India.' Godadhar says, 'Enough of geology. Now let us go to a restaurant and relax over a delicious lunch. It's already late.' When everybody gathers around the dinner table, the conversation starts with ...

Gond is a tribe in central India. Goonda An outlaw, a don. Gothraml Gothra( s)IGotra Lineage within a caste, indicating common descent from a mythical ancestor. Marriage within the same gotra was traditionally prohibited to prevent ...

Tribal Ecosystem and Malnutrition in India (1989)

Proceedings of the National Seminar by P. D. Tiwari, A. N. Sharma

Gond is the most predominant tribe in the 190 TRIBAL ECOSYSTEM AND MALNUTRITION IN INDIA.

The estimated 9 million Gonds represent the largest tribal group in central India. The Gond language is a Dravidian language related to Andhran and Telugu, but it is now only spoken by about half the Gonds. The rest speak various Indo-Aryan ...

Gond, but was to be ready to advance. without delay if called upon. The XI. Corps was to hold the line to which it had been forced back the evening before: but, like ...

Online dictionaries and encyclopedias with entries for Gond

Couldn't select: You have an error in your SQL syntax; check the manual that corresponds to your MariaDB server version for the right syntax to use near 'Gond"" IN BOOLEAN MODE) LIMIT 1,1' at line 1

See also the blanagrams of Gond!

Go to the pronunciation of Gond to learn how to say it correctly!