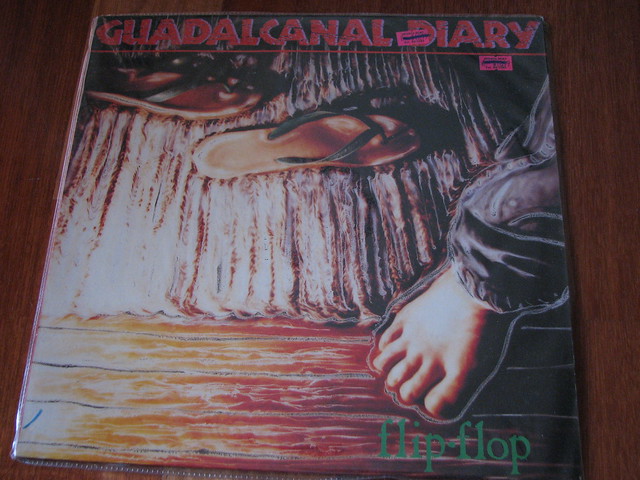 "Guadalcanal Diary" is a memoir written by war correspondent Richard Tregaskis and first published by Random House on January 1st 1943. The book recounts the author's time with the United States Marine Corps on Guadalcanal in the early stages of the pivotal months-long battle there starting in 1942.

Guadalcanal Diary is an alternative jangle pop group. They originated in Marietta, Georgia, a suburb of Atlanta, but they were often billed as being "from Athens, Georgia" in the early 1980s. The band formed in 1981 and disbanded in 1989. They reformed in 1997, but never recorded any new material. After going on hiatus in 2000, Guadalcanal Diary temporarily reunited for a second time in 2011 for Athfest, where they celebrated their 30th anniversary.

Printed dictionaries and other books with definitions for Guadalcanal Diary

HOOK MALONE Lewis Seller's Guadalcanal Diary is a realistic film about a platoon of U.S. Marines fighting in the South Pacific.

Despite these shortcomings, Guadalcanal Diary is an entertaining film that 705 GUADALCANAL DIARY (1943)...

The Vietnam War and Our National Identity by Christian G. Appy

Guadalcanal Diary is a classic of what we would now call embedded combat reporting, offering an eyewitness account of the first six weeks of the famous battle ...

Guadalcanal Diary is a 20th Century Fox film directed by.

A Salute to America's Elite Fighting Force by Scott Keller

With predictable inflammatory dialogue and plotting and broad burlesque performances by a gaggle of recognizable character actors in familiar stereotypes, Guadalcanal Diary is a rush job notable today for an early appearance by Anthony ...

Guadalcanal Diary. New York: Modern Library, 2000. Guam, Battle of This article discusses the fall of Guam to the Japanese on December 10, 1941. The battle to retake the island is discussed in Mariana Islands Campaign. Guam, in the ...

Encyclopedia of the Veteran in America [2 volumes] (2009)

by William A. Pencak

himself of Mexican descent, as a Mexican- American marine private in the popular War World II epic Guadalcanal Diary (1943) and in the modest film A Medal For Benny (1945), the story of War World II Hispanic sacrifices was often forgotten ...

More common were films that focused on pro-American propaganda, generally combined with anti-Nazi or anti-Japanese propaganda, including such films as Guadalcanal Diary (1943), Destination Tokyo (1943), Thirty Seconds over Tokyo ...

Encyclopedia of the Veteran in America (2009)

as a Mexican- American marine private in the popular War World II epic Guadalcanal Diary (1943) and in the modest film A Medal For Benny (1945), the story of War World II Hispanic sacrifices was often forgotten. However, the voice of other ...

Online dictionaries and encyclopedias with entries for Guadalcanal Diary