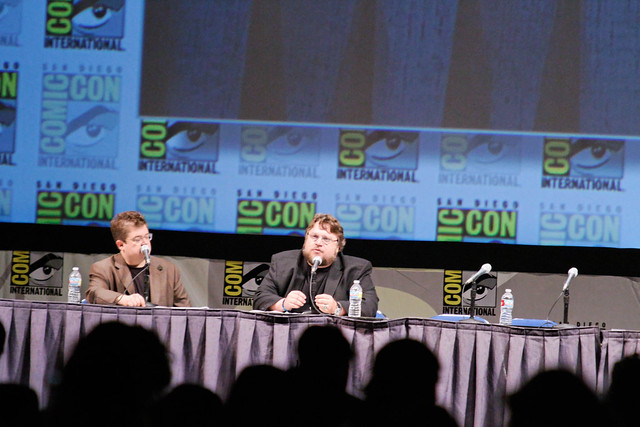 Who is Guillermo Del Toro?

Guillermo del Toro Gómez is a Mexican film director, screenwriter, producer, and novelist. In his filmmaking career, del Toro has alternated between Spanish-language dark fantasy pieces, such as The Devil's Backbone and Pan's Labyrinth, and more mainstream American action movies, such as Blade II, Hellboy, its sequel Hellboy II: The Golden Army, and Pacific Rim.

Printed dictionaries and other books with definitions for Guillermo Del Toro

Guillermo del Toro make a striking trio of visionary filmmakers who might be able toreforgethe child's sense ofcinema asametaphor for the universe. Anddel Toro, justbecause ofhis power as a writer, may be the most significant ofthe three.

An Encyclopedia of Movies, Stars, Concepts, and Trends by Scott L. Baugh

The youngest of the so-called “three amigos” of the MEXICO CITY DIRECTORS, Guillermo del Toro has developed a wide-ranging career as writer, director, and producer both in Mexico and Hollywood. Born and raised in Guadalajara under ...

Encyclopedia of the Vampire (2011)

The Living Dead in Myth, Legend, and Popular Culture by S. T. Joshi

Director: Peter Jackson Screenplay: Fran Walsh, Philippa Boyens, Peter Jackson, Guillermo del Toro; based on the novel The Hobbit, or There and Back Again by J. R. R. Tolkien (padded out with material from the ...

Online dictionaries and encyclopedias with entries for Guillermo Del Toro

When I was a teenager there was no video in my country. Betamax came to Mexico very slowly. (Guillermo del Toro)
more quotes...