Hail appears in the following palindrome (phrase that reads the same backward as forward):

The word hail is considered to be an easy one, according to the Dale-Chall word list, which includes 3000 words that all fourth-grade American students should know and understand.

Definition of the noun hail

What does hail mean as a name of something?

Alternative definition of the noun hail

Specialised definition of the noun hail

Definition of the adjective hail

What does hail mean as an attribute of a noun?

Definition of the verb hail

What does hail mean as a doing word?

Alternative definition of the verb hail

Phrases starting with the word Hail:

Phrases ending with the word Hail:

Printed dictionaries and other books with definitions for Hail

The Path of a Saxon Sorcerer by Alaric Albertsson

Hail is the whitest of seeds, its circling comes from the lofty sky, it tosses in the wind's shower, it then becomes water...

Truly life-threatening hail is a rarity in Europe; the worst hailstorms—those most likely to form large, deadly stones— tend to ...

but hail is an unusual result of vapor condensation and freezing, and appears to be formed when the air is in violent commotion at an elevation where the temperature is very low — perhaps when a body of warm moist air somehow flows up ...

Hail is a form of solid precipitation.

An Advent Message of Hope and Deliverance by John A. Stroman

The word hail means to greet with enthusiastic acclaim and welcome. This Advent let us say, “Hail, Mary!” THE MARY OF THE BIBLE The biblical account of Advent is rooted in Old Testament events, beginning when God promised Abram, ...

A Guide to Academic Writing for Students by Stewart Clark, Graham Pointon

As a verb, hail means to make a gesture to stop a taxi or bus. In another sense, it means to praise someone or something for success, a brave action, or similar: All the critics hailed the play as a masterpiece. Hail is used less frequently as a ...

from the practical and devotional writings of the eminently pious and learned Bishop Hall. To which is prefixed, a memoir of the author by Joseph Hall

Hail is an ordinary occurrence, murrain of cattle an ordinary disease ; yet for a plague to obdurate Pharaoh, both were miraculously wrought. When we observe things manifestly deviating from the road of nature, and working above the power ...

A Meteorotheological Survey by Steve A. Wiggins

although generally produced by a thunderstorm, hail is a weather phenomenon that consists of ice. The frozen water droplets high in a cumulus cloud begin to fall, but in a severe storm an updraft lifts the falling ice back up within the cloud.

Gospel to the Nameless and Faceless by W. Mark Tew

The greeting translated hail is the Greek word χαίρω (chairō). This root ...

Hall Hail is a precipitation in the form of round or irregularly shaped lumps of ice. Falling ice crystals that collide with supercooled water droplets become white pellets called snow pellets or gmupcl. When such collisions occur repeatedly, the ...

Legends of the Earth, Sea, and Sky by Tamra Andrews

Hail has always posed a threat to creatures and crops exposed to the open land. Hail could devastate farmers' fields in seconds, and early agriculturists knew all too well of its strength. When hailstorms ravage the earth, some people ...

HAIL, in meteorology, a meteor consisting of vapour more intensely frozen than when it appears in the form of snow. Brccakta supposes it to be formed in the higher regions of the atmos- Voi. II. HAI phere, where the cold is extreme, and where ...

by John A. Beck

Hail is an icy form of precipitation associated with severe thunderstorms. It forms when water droplets are seized by the powerful updrafts of tall, mature thunderstorms and swept above the freezing level. Complimentary downdrafts recirculate ...

But hail doe* none of these. In winter, it lies not . sufficiently close to cover vegetables from the nipping frosts ; and in spring and summer itnot only has a chilling and blasting effect, but often does great damage to the more tender plants by the ...

Online dictionaries and encyclopedias with entries for Hail

Distribution of usage frequency for the most common synonyms of the verb hail: 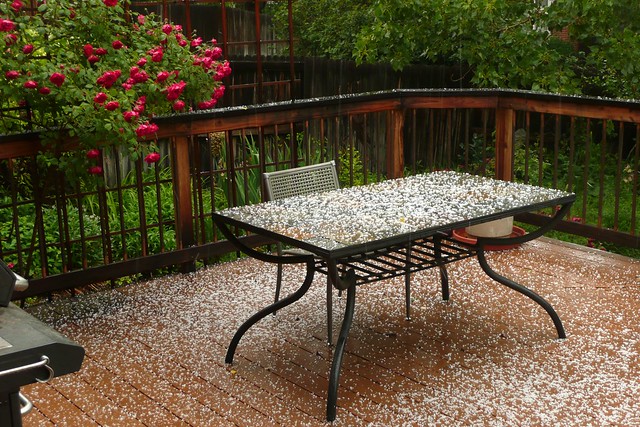 View more pictures about All Hail and Hail Storm.

Wind is changing, it's getting stronger
when rain starts wetting, hail will hit the ground
hail will hit my back, I'll be waiting (Ilaria Boffa)
more quotes about hail...