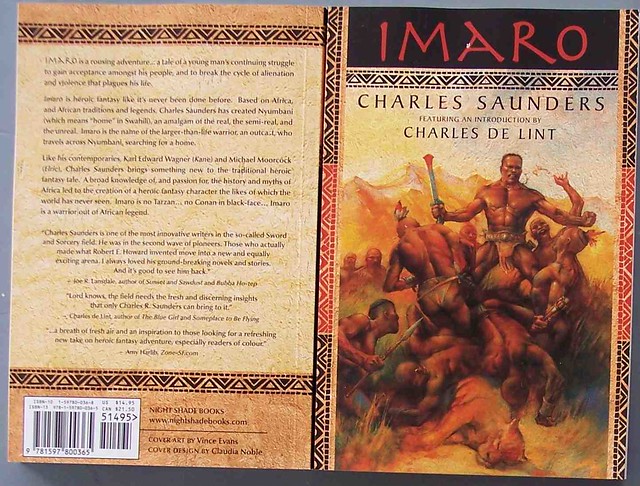 "Imaro" is a sword and sorcery novel written by Charles R. Saunders, and published by DAW Books in 1981. It may have been one of the first forays into the sword and sorcery genre by a black author. The novel is a collection of six short stories which were originally published in Dark Fantasy, a fanzine published by Canadian comic book artist Gene Day during the 1970s.

Printed dictionaries and other books with definitions for Imaro

Historical Dictionary of the Republic of Macedonia (2009)

Heavily influenced by the ideas of socialism, Russian populism, and, in some cases, anarchism, the IMARO activists saw the future autonomous Macedonia as a multinational polity, and did not pursue the self-determination of Macedonian Slavs as a separate ethnicity. Therefore, Macedonian (and also Adrianopolitan) was an umbrella term covering Bulgarians, Turks, Greeks, Vlachs , Albanians, Serbs, ...

The leftist IMARO faction founded the National Federative Party; the rightist faction, the Union of Bulgarian Constitutional Clubs. When the Young Turk regime failed to satisfy these political organizations' desire for autonomy for Macedonia and the Adrianople region, IMARO re-activated itself and resumed its former violent actions.

Online dictionaries and encyclopedias with entries for Imaro