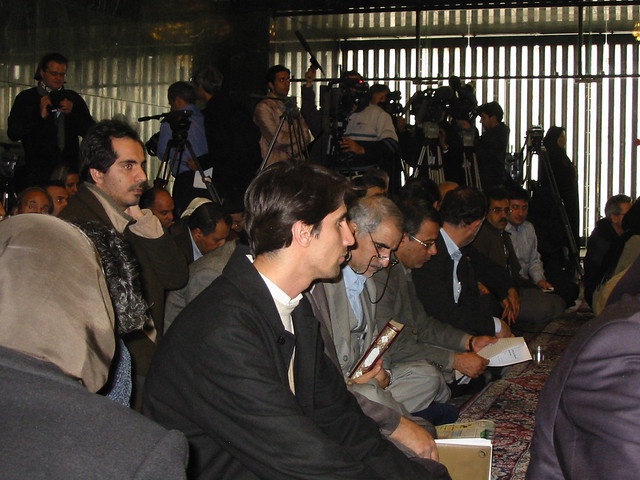 Iran appears in the following palindromes (phrases that read the same backward as forward):

Iran, also known as Persia, officially the Islamic Republic of Iran, is a country in Western Asia. It is bordered to the northwest by Armenia and Azerbaijan, with Kazakhstan and Russia across the Caspian Sea; to the northeast by Turkmenistan; to the east by Afghanistan and Pakistan; to the south by the Persian Gulf and the Gulf of Oman; and to the west by Turkey and Iraq. Comprising a land area of 1,648,195 km², it is the second-largest nation in the Middle East and the 18th-largest in the world; with 78.4 million inhabitants, Iran is the world's 17th most populous nation. It is the only country that has both a Caspian Sea and Indian Ocean coastline. Iran has been of geostrategic importance because of its central location in Eurasia and Western Asia and the Strait of Hormuz.

Printed dictionaries and other books with definitions for Iran

A Concise Introduction to Logic (2011)

Iran is a country waiting to be rediscovered. Foreign visitors can travel freely and will receive a warm welcome wherever they go. There are many facets to-this extraordinary country, Iran is blessed with a vast cultural wealth. The architectural ...

Christine Fair Introduction Iran is a country of both regional and international strategic significance. Its population is estimated to be nearly 70 million, and it sits astride the intersection of Central, Southwest, and South Asia, as well as the ...

We conclude that the reports that Taliban insurgents are receiving support from Iran is a matter of very serious concern. Any such assistance is unacceptable, endangers regional stability and can only hinder efforts to establish closer relations ...

My Time, My World

Iran is an important country of the Persian Gulf region, a non-Arab Islamic Republic with huge deposit of oil. It is a Shiite dominated Islamic Republic in the midst of Sunni populated Muslim countries like Iraq and Pakistan. While its oil riches ...

Iran is a country rich in culture, with a long, sometimes violent history.

Dictionary of Iran: A Shorter Encyclopedia (2015)

tween Qajar Iran and Great Britain negotiated by Sir Gore Ouseley based on the work of Sir Harford Jones. It was executed in Tehran, November 25, 1814. Its basic provisions were: all alliances between ...

A Dictionary of the Aneityumese Language, Also Outlines of Aneityumese Grammar, and an Introduction (1882)

iraq, iran, Kuwait, and the United Arab Emirates are the ...

Online dictionaries and encyclopedias with entries for Iran

Iran has long sponsored terrorists who carry out homicide bombings in Israeli cities. However, it is a mistake to believe the danger Iran poses is directed at Israel alone. (John Doolittle)
more quotes about iran...