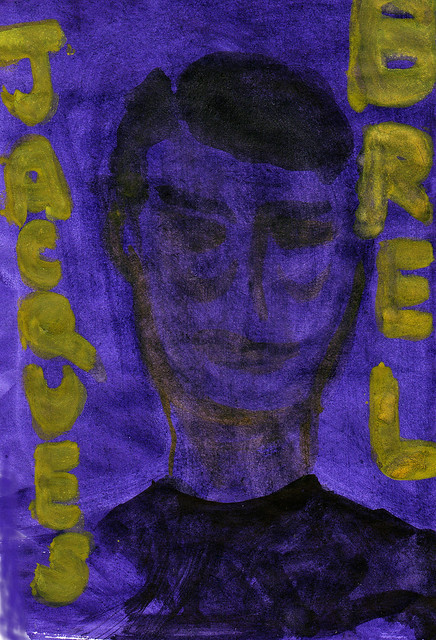 Who is Jacques Brel?

Jacques Brel: Jacques Romain Georges Brel was a Belgian singer-songwriter who composed and performed literate, thoughtful, and theatrical songs that generated a large, devoted following, initially in Belgium and France, later throughout the world. He was widely considered a master of the modern chanson. Although he recorded most of his songs in French, he became a major influence on English-speaking songwriters and performers such as David Bowie, Alex Harvey, Leonard Cohen, Marc Almond and Rod McKuen. English translations of his songs were recorded by many top performers in the United States, including Ray Charles, Judy Collins, John Denver, the Kingston Trio, Nina Simone, Frank Sinatra, Scott Walker, and Andy Williams. In French-speaking countries, Brel was a successful actor, appearing in ten films. He also directed two films, one of which, Le Far West, was nominated for the Palme d'Or at the Cannes Film Festival in 1973. Having sold over 25 million records worldwide, Brel is the third best-selling Belgian recording artist of all time.

Printed dictionaries and other books with definitions for Jacques Brel

Jacques Brel is a French singer from Belgium ...

be A fiveminute walk from the GrandPlace, Éditions Jacques Brel is a small but inventive museum ...

Jacques Brel was a Belgian singer, songwriter, poet, and actor whose songs have been translated into multiple languages and recorded by artists as diverse as Joan Baez (“The Dove,” 1967), Frank Sinatra (“If ...

Jacques Brel: Almost certainly the most interesting musician to emerge from Belgium Big Star – Bell, Stephens, Hummel and Chilton: Should have ...

A similar anecdotal extension to the phrase appeared in the title of a revue Jacques Brel is Alive and Well and Living in Paris, which opened at the Village Gate in New York in 1968, with songs by the eponymous Belgian singer and songwriter, ...

A Dictionary for the Modern Singer (2014)

In 1968, an Off-Broadway revue entitled Jacques Brel Is Alive and Well and Living in Paris opened, featuring English translations of some of Brel's most well-known songs.

Online dictionaries and encyclopedias with entries for Jacques Brel

Go to the usage examples of Jacques Brel to see it in context!