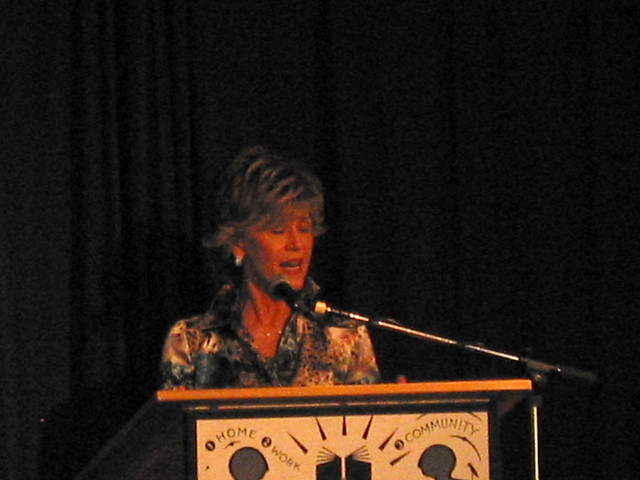 Who is Jane Fonda?

Jane Fonda is an American actress, writer, political activist, former fashion model and fitness guru. She is a two-time Academy Award winner. In 2014, she was the recipient of the American Film Institute AFI Life Achievement Award.

"Jane Fonda" is an artwork by Octavio Ocampo.

Printed encyclopedias and other books with definitions for Jane Fonda

The idea that somatic self-transformation must fit the model of Arnold Schwartzenegger and Jane Fonda is a very pernicious presumption which reflects the 260 Rethinking Art ...

Jane Fonda: The Private Life of a Public Woman.

and then made into a film in 1968 featuring Jane Fonda, recently married to the director Roger Vadim. After this, Fonda ...

The Encyclopedia of the Vietnam War: A Political, Social, and Military History, 2nd Edition [4 volumes] (2011)

American actress and anti–Vietnam War activist Jane Fonda seated at a North Vietnamese antiaircraft gun during a visit to Hanoi in July 1972. Propaganda broadcasts of Fonda's trip were a coup for the North Vietnamese and an affront to ...

Online dictionaries and encyclopedias with entries for Jane Fonda

To be a revolutionary you have to be a human being. You have to care about people who have no power. (Jane Fonda)
more quotes...