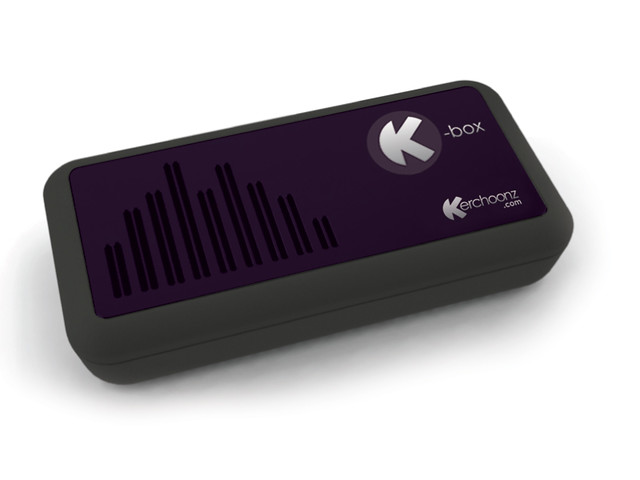 The K-box Gel audio speaker is composed of a small loudspeaker powered by an internal amplifier which when placed onto solid flat surfaces, walls or windows turns the surface into speakers or sound board. It amplifies and provide stereo sound that is supplied by any audio source that has 3.5mm audio output. The K-box can be utilized with contemporary electronics, like a computer, iPod, iPhone, television, or portable gaming device. The K-box is about the size of a standard cell phone. The K-box uses a hybrid technology of standard speaker, delivering mid to high frequencies and a Gel Audio driver delivering low end Bass frequencies. When placed on flat solid surfaces, this technology enhances the bass response via high-intensity vibrations. in order to generate sound and thus improve the volume and audio quality. The K-box gel audio technology has been explained as “hydro-gel” suspension system used to improve the dynamics in comparison to similar speaker products which typically work on transduction.

Printed books with definitions for K-box

A k-box is a Cartesian product of closed intervals [a1 ,b1]×[a2 ,b2 ]×· · ·×[ak ,bk]. A k-box representation of a graph G is a mapping of the vertices of G to k-boxes in the k-dimensional Euclidean space such that two vertices in G are adjacent if ...

Boxicity A k-box is a Cartesian product. Boxicity and Poset Dimension.

Discussion The K-Box is an integration tool with the focus on automatic ...

k-Boxes. Let S be a set of points in Rn, and k be a given integer, k ≤ | S|. A maximal k-box is an n-dimensional interval which does not contain more than k points of S in its interior, and which is maximal ...

Online dictionaries and encyclopedias with entries for K-box

The trouble in corporate America is that too many people with too much power live in a box (their home), then travel the same road every day to another box (their office). (Faith Popcorn)
more quotes about k-box...

Go to the usage examples of K-box to see it in context!