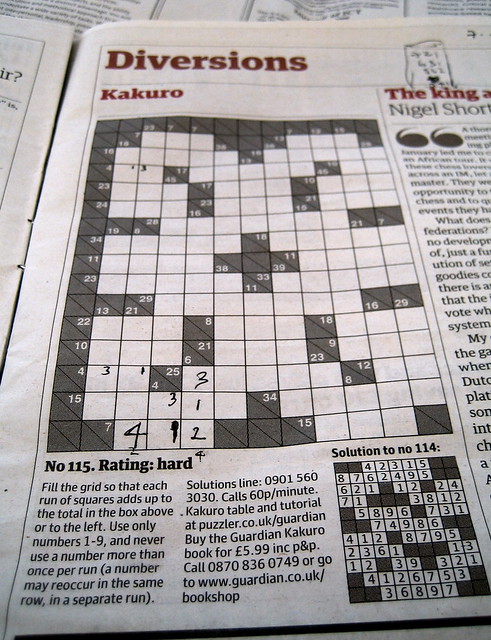 Definition of the noun Kakuro

What does Kakuro mean as a name of something?

Kakuro or Kakkuro is a kind of logic puzzle that is often referred to as a mathematical transliteration of the crossword. Kakuro puzzles are regular features in many math-and-logic puzzle publications in the United States. In 1966, Canadian Jacob E. Funk,an employee of Dell Magazines came up with the original English name Cross Sums and other names such as Cross Addition have also been used, but the Japanese name Kakuro, abbreviation of Japanese kasan kurosu, seems to have gained general acceptance and the puzzles appear to be titled this way now in most publications. The popularity of Kakuro in Japan is immense, second only to Sudoku among Nikoli's famed logic-puzzle offerings.

Printed dictionaries and other books with definitions for Kakuro

Real Kakuro is a fun math version of a crossword puzzle. Each row or column must add up to the number clue given at the beginning of every row and column. Careful! You can only use the numbers 1–9 one time in each row or column.

The Latest Puzzle Craze Since Sudoku by Puzzle Society

Kakuro is a puzzle game that’s a cross between both traditional crosswords and Sudoku.

100 Addictive Logic Puzzles by Will Shortz

Kakuro Presented by Will Shortz (2006)

100 Addictive Logic Puzzles by Will Shortz

Kakuro is a useful variant to Sudoku, since it not only tests your logical aptitude but also exercises your numerical reasoning skills because it demands that you use mental arithmetic to solve the puzzle. It is this variety that tends to appeal to ...

Linear and Complex Analysis for Applications (2017)

Kakuro is a puzzle where one is given a grid, blank squares, the row sums, the column sums, and blacked-out squares. One is supposed to fill in the blanks in the grid, using the digits 1 through 9. There are two added constraints; no repeats ...

Kakuro is a logic puzzle from Japan. lt's based on an empty grid with some helpful clues. The aim is to use the clues to fill the grid with all the missing numbers. Kakuro puzzles come in all shapes and sizes, Here's an example: Il looks а bit like ...

kakuro /'kakarao, ka'kjoarao/ D n. a number puzzle in which players have to insert numbers into a crossword like grid, with numbered clues and some blank squares. — ORIGIN blend ofJapanese kasan 'addition' ...

kakuro /'kakoroo, ko'kjooroo, -'ooroo/ D noun [mass noun] a type of number puzzle in which players have to insert numbers into a ...

Online dictionaries and encyclopedias with entries for Kakuro

Video shows what kakuro means. A type of number puzzle, similar to a crossword but with numbers. Each "clue" is the sum of the digits to be placed in its group ...