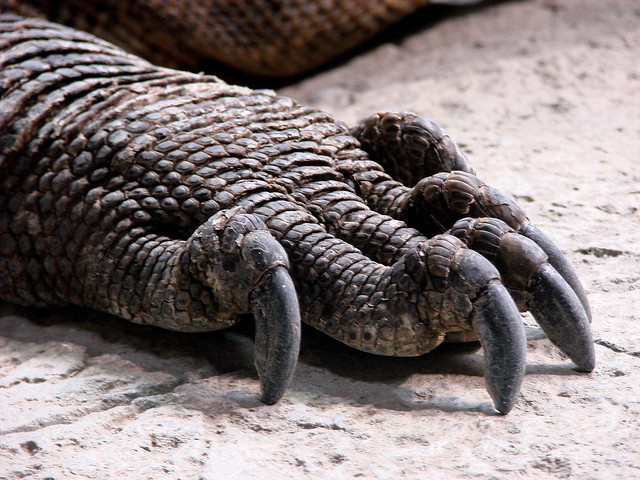 Klaw: Ulysses Klaw is a fictional character, a supervillain that appears in comic books published by Marvel Comics. He is depicted as a human physicist who has been transformed into solid sound, and who wears a sonic emitter on his right wrist as a prosthetic device. He has often been shown in conflict with the Fantastic Four and the Avengers and is an enemy of the Black Panther and Ka-Zar.

Printed dictionaries and other books with definitions for Klaw

Klaw is a mercenary responsible for the death of T'Challa's father and attempts to steal Wakanda's unique natural resources, a rare mineral called Vibranium. Only found in Wakanda, Vibranium's unique properties make it highly valuable, and it serves as the foundation of the Wakandan economy and the source of the country's prosperity. Not surprisingly, the Black Panther and the Fantastic Four defeat Klaw. The significance of this story rested in its subtle acknowledgement of the ...

chloral ('klawrl) an oily liquid formed by the reaction of chlorine and alcohol. Used in the production of c. hydrate, a drug used as a hypnotic; it is well tolerated by children and the elderly. chlorhexidine (klaw'heks'deen) an antibacterial ...

Claudication (klaw"di-kä' shun) (n.) Limping due to muscle cramp or pain associated with activity or exertion. Usually implies intermittent claudication, which may be due to ischemia or neurologic impairment in the involved limb. Clavicle (klav'ik'l) The collarbone. This bone forms the anterior aspect of the shoulder girdle. It articulates with the sternum medially and the acromion laterally. Clavicle Clavus (klä'vus) (n.) A circumscribed ...

Online dictionaries and encyclopedias with entries for Klaw

See also the blanagrams of Klaw!

Go to the usage examples of Klaw to see it in context!