Lend appears in the following palindrome (phrase that reads the same backward as forward):

Lend is sometimes a misspelling of led.

The word lend is considered to be an easy one, according to the Dale-Chall word list, which includes 3000 words that all fourth-grade American students should know and understand.

Definition of the verb lend

What does lend mean as a doing word?

Lend is one of the top 1000 most common verbs in the English language.

Alternative definition of the verb lend

Lend is the 4th district of the Austrian city of Graz. It is located on the west bank of the Mur and north of the district Gries and west of the district Innere Stadt and the Schloßberg.

"Lend" is a composition, cataloged instance.

Phrases starting with the word Lend:

Phrases ending with the word Lend:

Other phrases containing the word Lend:

Printed dictionaries and other books with definitions for Lend

Perspectives from the Theory of Economic Growth by Stefano Manzocchi

the incentive to lend is a decrease in the amount of net foreign borrowing ( although in the case of a higher premium, the assumption of a downward-sloping demand schedule for net borrowing is required). We consider two distinct kinds of ...

The only safe thing to lend is an ear. The one good thing about being poor, with having no stocks or money, is that recessions and depressions mean nothing at all, since there is nothing at all at stake, nothing to lose. The aristocrats of poverty ...

Social Science from the Bottom Up by Joshua M. Epstein, Robert Axtell

the amount necessary to have children, in which case the maximum amount it may lend is the excess wealth; 0 An agent is a potential borrower if it is of childbearing age and has insufficient wealth to have a child and has income ( resources ...

The 70% the bank will lend is the approximate complement of the 140% the broker/dealer can use. The mix of the security being pledged could also affect the amount the bank is willing to lend. If one security makes up a major part of the loan, ...

by University of Chicago Law Review

When Bank is owed more, then Bank's unwillingness to lend is a stronger signal to Creditor that the ...

The Lend-Lease program allowed President Franklin D. Roosevelt to “sell, transfer title to, exchange, lease, lend, or otherwise dispose of, to any such government [whose defense the president deems vital to the defense of the United States] ...

Online dictionaries and encyclopedias with entries for Lend

Distribution of usage frequency for the most common synonyms of the verb lend:

Comparison of usage frequency between the verb lend and its most common antonym: 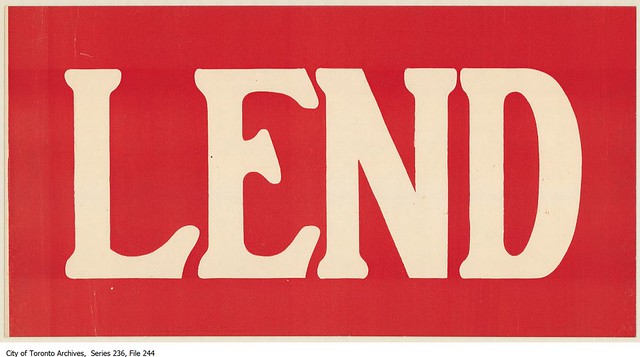 View more videos about Lend Itself to and Lend a Helping Hand.

Horrible song as part of the sign language agenda of the 70's. If deaf people could hear, they'd hate this song, too.