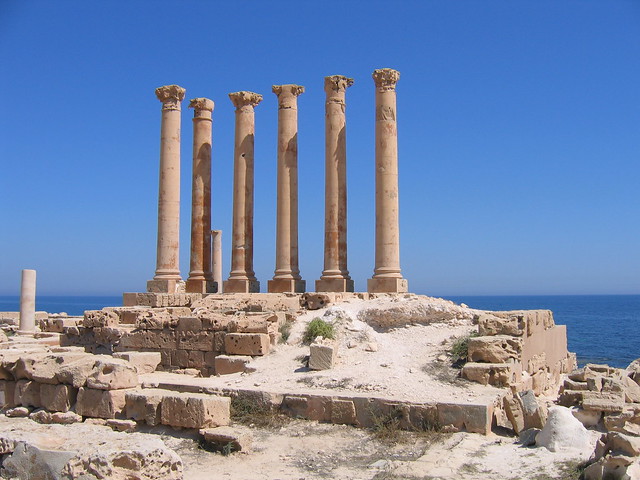 Libya, officially the State of Libya, is a country in the Maghreb region of North Africa bordered by the Mediterranean Sea to the north, Egypt to the east, Sudan to the southeast, Chad and Niger to the south, and Algeria and Tunisia to the west. The three traditional parts of the country are Tripolitania, Fezzan and Cyrenaica. With an area of almost 1.8 million square kilometres, Libya is the fourth largest country in Africa, and is the 17th largest country in the world.

Phrases ending with the word Libya:

Other phrases containing the word Libya:

View more phrases with the word Libya in thesaurus!

Printed dictionaries and other books with definitions for Libya

INTRODUCTION Physically, Libya is a land of contrasts. The gorgeous waters of the coastal Mediterranean Sea have been the routes of maritime occupiers, and the vast interior sand seas have pro- vided routes for the trade that linked the ...

Libya is a vast and diverse ...

Since Libya is a part of Africa, it is pertinent to set forth clearly an uncomplicated geographical definition of Africa as a continent By “Africa” the ancient world meant simply the entire massive continent, mostly unknown to written sources at the ...

We have heard the excuse that these terrorists cannot be captured because Libya is a dangerous operating environment. Yet, the same Administration offering this excuse somehow managed to recently capture al-Qa'ida operative Abu Anas ...

nevertheless, was quick to point out the differences between Libya and Kuwait: Libya is a huge empty country and the King was isolated at the top. Kuwait is a compact little state with a ...

Libya is a rich and strategic country. Foreign intervention is no accident. Who is going to control its wealth, how is it going to be used and/or divided among the Western transnational oil companies (instead of the Chinese government, which ...

Working Women and their Rights in the Workplace (2015)

libya is a country on the horizon of a new era; ...

Chemistry, Energy and the Environment (1998)

Libya is a country where solar energy is promising for the development of its remote and isolated regions. These regions are characterized by a low density of population and low energy needs. On the other hand, the abundant amount of solar ...

Tripoli, Libya is an anachronism. An ancient city with a thousand stories to tell. A city that saw the worst of many wars, plagues, and violence of every kind. Beautiful palaces in one area and an open camel market not far away, the smell of ...

Libya is a sparsely populated country where population centres are separated by immense expanses of desert and there are strong regional and tribal loyalties. Gaddafi's regime was largely overthrown by militias which came from different ...

Tribe and Revolution : an Account of the Zuwaya and Their Government by John Davis

Years of bitter war by a predominantly tribal society against Italian imperial power , and the slaughter of many thousands of Libyans by Mussolini's followers, left an unusually destructive colonial heritage. Libya is a country gradually formed in ...

START THE DAY WITH HISTORY by Steven Carol

Libya and CUSH are also subordinate to Egypt ( Dan ...

HEALTH Libya is well ahead of other African nations in its health sector. The government-funded children's hospital in Jalah is considered among the best on the continent. However, there is not any government program aimed at the health ...

LIBYA MALAYSIA GEOGRAPHY GEOGRAPHY Location Coastal North Africa, between Location Southeastern Asia on a peninsula Egypt and Tunisia south of Thailand, plus the northern Area 679,360 sq. miles third of the island of Borneo ...

Online dictionaries and encyclopedias with entries for Libya

In Sign Language to NATO, NATO Crimes In Libya

We know that this mad dog of the Middle East has a goal of a world revolution. (On Muammar Qaddafi of Libya) (Ronald Reagan)
more quotes about libya...