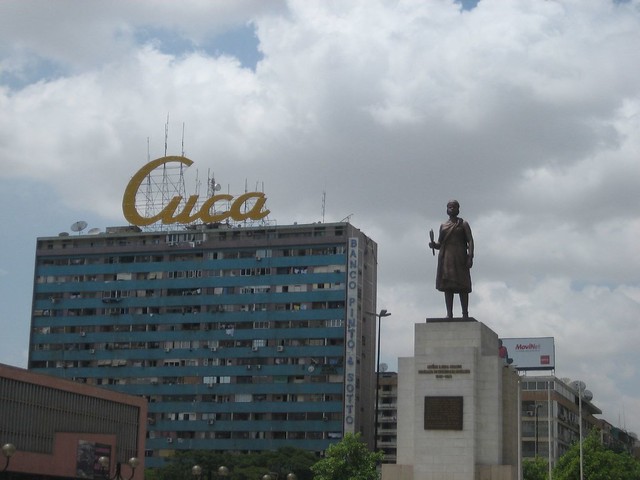 Luanda, formerly named São Paulo da Assunção de Loanda, is the capital city of Angola, and the country's most populous and important city, primary port and major industrial, cultural and urban centre. Located on Angola's coast with the Atlantic Ocean, Luanda is both Angola's chief seaport and its administrative center. It has a metropolitan population of over 5 million. It is also the capital city of Luanda Province, and the world's third most populous Portuguese-speaking city, behind only São Paulo and Rio de Janeiro, both in Brazil, and the most populous Portuguese-speaking capital city in the world, ahead of Brasília, Maputo and Lisbon, for example.

Printed dictionaries and other books with definitions for Luanda

Luanda Expansive beaches, expensive bars and tatty overcrowded townships, Luanda is a kaleidoscopic vision of Angola at the sharp end » Miradouro de Lua A spectacular lookout over a canyon of moonlike cliffs that cascade dramatically ...

A Framework for Addressing Urban Challenges in Africa

Luanda is a typical primate city whose share of the population in Angola is about half the total and is more than double that ...

A general collection of ... voyages and travels, digested by J. Pinkerton (1814)

Luanda is an island and town of the same name, being the capital of all those countries the Portuguese possess in those vast regions of the Blacks. The Dutch once made themselves masters of it, but the Portuguese with much bravery beat ...

urban area, 2,766,000 Luanda is the capital ofAngola, a country in southwestern Africa. The city lies on the coast of the Atlantic Ocean. It is by far Angola's largest city. Luanda is a busy seaport. Ships load up there ...

Missions Department, to establish a Bible college on the outskirts of Luanda at Kicolo. A campus was constructed, and the Gordon S. Bialiks were the first ...

The Tertiary formations include Pliocene red clays and sands near Luanda and Neogene marls and limestones in the surroundings of Benguela and Mocamedes. The seaward- dipping sedimentary formations have been truncated by ...

Online dictionaries and encyclopedias with entries for Luanda

Video shows what Luanda means. The capital of Angola.. Luanda Meaning. How to pronounce, definition audio dictionary. How to say Luanda. Made with ...