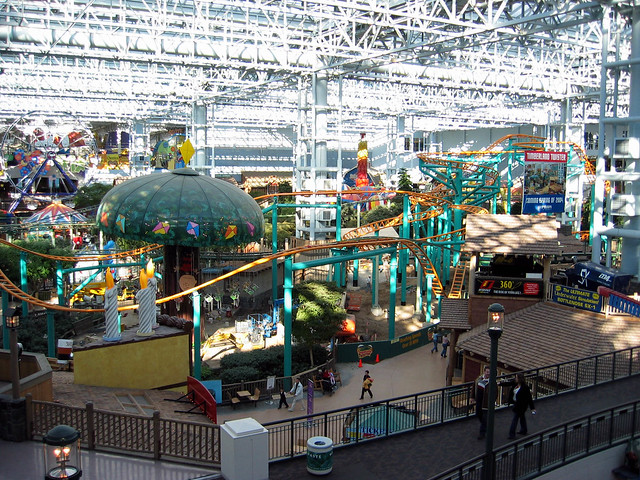 Mall
of
America
is an acrostic for moa.

The Mall of America is a shopping mall owned by the Triple Five Group. It is located in Bloomington, Minnesota, southeast of the junction of Interstate 494 and Minnesota State Highway 77, north of the Minnesota River and across the interstate from the Minneapolis–St. Paul International Airport. Opened in 1992, the mall receives over 40 million visitors annually, the most of any mall in the world. 80 percent of the visitors are from Minnesota, Wisconsin, Iowa, the Dakotas, Illinois, Ohio, and Canada. The Triple Five Group, owned by Canada's Ghermezian family, owns and manages the Mall of America, as well as the West Edmonton Mall.

"Mall of America" is a musical EP of Radiator Hospital.

Printed encyclopedias and other books with definitions for Mall of America

Jon Goss, for example, studied the Mall of America in Bloomington, Minnesota, which has 520 stores, chapels, a roller coaster, an aquarium, and a rain forest ( see photo). In this environment, fantasy, fun, and the commodity are seamlessly ...

The Mall of America is over 4.2 million square feet and contains a seven-acre amusement park at its center. RETAIL STORES In the United States, retail stores account for a large portion of trade conducted within the country. The larger stores ...

Nearby, in Bloomington rises the Mall of America, projected to expand to 10 million square feet.

a seven-acre theme park inside Minneapolis's giant Mall of America, which boasts 16 rides (including a log ...

“Once-Upon-a-Time in the Commodity World: An Unofficial Guide to Mall of America.” Annals of the Association of American Geographers 89, no.

This model of suburban materialism was later imitated and then perfected by other Jewish real estate developers, including Alfred Taubman, the Simon brothers (Minneapolis 's Mall of America), and the Ghermezian family (West Edmonton ...

Online dictionaries and encyclopedias with entries for Mall of America

Photos about Mall of America

Go to the usage examples of Mall of America to see it in context!