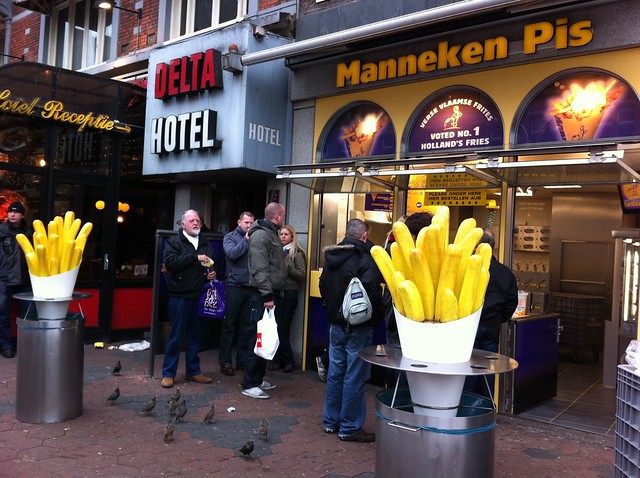 "Manneken Pis" is a landmark small bronze sculpture in Brussels, depicting a naked little boy urinating into a fountain's basin. It was designed by Hiëronymus Duquesnoy the Elder and put in place in 1618 or 1619.

"Manneken Pis" is a musical album of Noordkaap, soundtrack.

"Manneken Pis" is a 1995 Belgian comedy-drama film directed by Frank Van Passel and written by Christophe Dirickx. It premiered in May 1995 at the Cannes Film Festival. It received the André Cavens Award for Best Film and four awards at the Joseph Plateau Awards.

Printed dictionaries and other books with definitions for Manneken Pis

wThe Manneken Pis is a famous Brussels landmark, featuring a small bronze sculpture of a naked boy urinating into the basin ...

Manneken Pis is a straight shot from the Grand Place down rue de L'Etuve; going farther east and south will lead you into the Upper Town. Northwest of the Grand Place, boulevard Anspach, accessible by Metro stop Bourse, is a diagonal that ...

The Manneken Pis is a small bronze fountain sculpture of a little boy urinating. The legend is that, when the city was under siege in the fourteenth century, its attackers placed explosive charges within the city walls to destroy them. A little boy ...

The real Manneken Pis is a twofoot high bronze statue of a little naked boy whose urinating posture forms a fountain issuing into a pool below. This unusual fountain structure, designed and built around 1619, has become a symbol of Brussels ...

Manneken Pis is a small bronze statue of a boy peeing that is a landmark of the city. There are many colorful stories as to the origin of this particular image. Other landmarks are the Palace of Justice, the Cathedral of the Sacred Heart, which is ...

Online dictionaries and encyclopedias with entries for Manneken Pis

Go to the usage examples of Manneken Pis to see it in context!