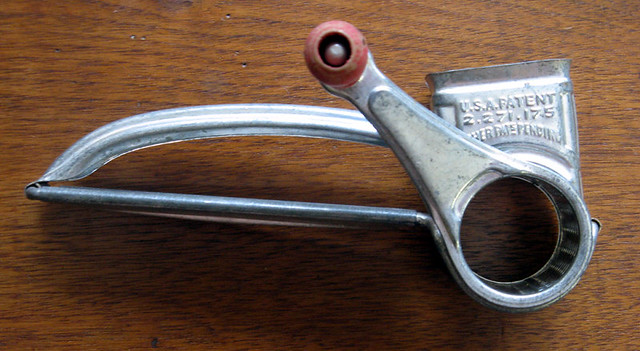 Mouli: Thiruvidaimarudur Sambamoorthi Ganapaadigal Balakrishna Sastrigal Mouli, credited as Mouli is an Indian stage and film actor, director and playwright. He is the son of noted Harikatha exponent T. S. Balakrishna Sastrigal. Mouli has stamped his authority on different facets of the film industry viz,. drama, script writing, acting and direction. He has directed films in Tamil and Telugu. A Kalaimamani award winner, his films have won five Nandi Awards including one for best direction in Telugu.

There are other characters with in their name, like Chandra Mouli.

Printed dictionaries and other books with definitions for Mouli

A mouli is a great way to achieve avery fine texture, but if you don't have one simply use a potato masher and then work it through a sieve or use a potato ricer. Peas are a great addition to this recipe as they are wonderfully sweet. Makes 650g ...

A stainless steel mouli is a hand tool and will make soups in a gentler way so that you can get a coarse, medium or smooth texture. (It is also much quieter than the earsplitting electronic blitz of the blender.) A wire mesh strainer and a colander, ...

Some suggested equipment A mouli is a rotary food mill used for making purées, mousses and soups (the best domestic version is made by Vev). An electric coffee mill for grinding spices (Braun). An electric hand mixer for whisking sauces ...

A Dictionary of Food and Nutrition (2014)

The Reticule and Pocket Companion, Or, Miniature Lexicon of the English Language (1867)

by Julian Evans, John A. Youngquist

Online dictionaries and encyclopedias with entries for Mouli

See also the blanagrams of Mouli!

Go to the thesaurus of Mouli to find many related words and phrases!