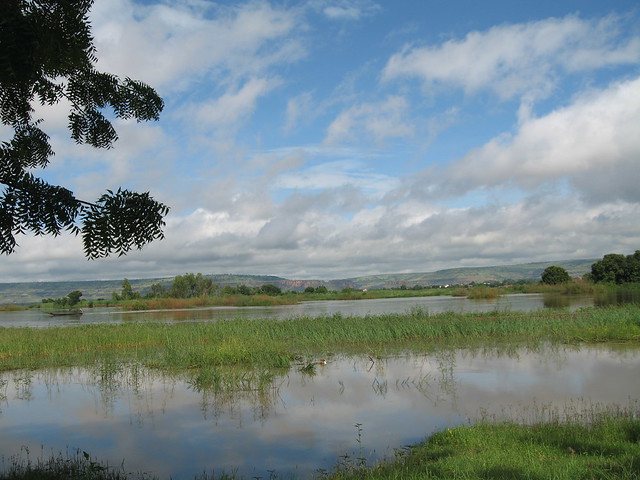 The Niger River is the principal river of western Africa, extending about 4,180 km. Its drainage basin is 2,117,700 km² in area. Its source is in the Guinea Highlands in southeastern Guinea. It runs in a crescent through Mali, Niger, on the border with Benin and then through Nigeria, discharging through a massive delta, known as the Niger Delta or the Oil Rivers, into the Gulf of Guinea in the Atlantic Ocean. The Niger is the third-longest river in Africa, exceeded only by the Nile and the Congo River. Its main tributary is the Benue River.

"Niger River" is a composition.

Printed dictionaries and other books with definitions for Niger River

NIGER RIVER. The great river of West Africa, 4 180 km long. It has been the subject of several agreements between the riparian states: Benin, Burkina Faso, Cameroon, Chad, Cote d'lvoire, Guinea, Mali, Niger, and Nigeria: • Act regarding ...

The Niger River, from which the country takes its name, flows through the southwestern corner of the country and is not navigable above Niamey. Parts of the present republic are connected historically to several of West Africa's great empires.

The region includes the Air and Ahaggar Mountains and the fertile Sahelian Plains along the Niger River and in the Tilemai Valley. The Tuareg heartland in northern Niger and Mali, the Nigerian department of Agadez and northern districts of ...

Encyclopedia of the United Nations and International Agreements: N to S (2003)

NIGER RIVER, The great river of West Africa, 4180 km long. It has been the subject of several agreements between the riparian states: Benin, Burkina Faso, Cameroon, Chad, Cote dTvoire, Guinea, Mali, Niger, and Nigeria: • Act regarding ...

The Niger River traverses Mali for 1,625 kilometers, a third of its total length. The river rises in the highlands of Guinea and Sierra Leone and flQWs into Mali in a northeasterly direction. Just beyond Bamako, its flow is broken by cataracts at ...

Online dictionaries and encyclopedias with entries for Niger River