OATH is a word made from vertically symmetrical letters.

Distribution of usage frequency for the most common synonyms of the noun oath:

Definition of the noun oath

What does oath mean as a name of something?

Alternative definition of the noun oath

Definition of the verb oath

What does oath mean as a doing word?

Oath is a hamlet in the English county of Somerset. It is the remnant of a deserted medieval village located in the parish of Aller. Oath is west of Langport and north of Curry Rivel.

There are other groups with in their name, like Broken Oath, Sacred Oath, Eternal Oath, Malefic Oath, Oath of Cirion, Ceremonial Oath, Darkness by Oath, Oath to Vanquish.

Oath is a retired Thoroughbred race horse, bred in Ireland and trained in the United Kingdom, best known for winning the 1999 Epsom Derby. He was injured in his next race and never ran again.

"Oath": Rota is an early 20th-century Polish epic poem, as well as a celebratory anthem, once proposed to be the Polish national anthem. Rota's lyrics were written in 1908 by activist for Polish independence, poet Maria Konopnicka. The music was composed two years later by composer, conductor and concert organist, Feliks Nowowiejski.

OATH a.k.a. Object-oriented Abstract Type Hierarchy is a class library for C++ from Texas Instruments.

Phrases starting with the word Oath:

Phrases ending with the word Oath:

Printed dictionaries and other books with definitions for Oath

The oath is that moral act which at one and the same time is the most solitary of acts and the most social of acts. For the...

An oath is the invocation of God — or of a god — a supernatural being — to witness the truth of the statement made by...

"1 Thus then an oath is a lawful and virtuous thing in itself, as is evident from its origin and its end. From its origin: because the ...

because an Oath is a kind of Torture, or the. and Success of the State, the best Expedient is, not to have recourse to...

Their Origin, Nature, and History by James Endell Tyler

This corresponds very closely with the authorized definition at the present time in Spain, " An oath is an attestation, or affirmation, on any subject, by the name of God, and some sacred thing. And no one ought to swear by heaven or earth, nor ...

Or, The Body and Substance of the Christian Religion, Comprised in Distinct Discourses Or Treatises Upon the Apostles Creed, the Lord's Prayer, and the Ten Commandments; in Two Volumes. The Whole Adjusted to the Sacred Scriptures and the Judgement of the Protestant Reformed Churches ... with Proper Indexes and Tables by John Edwards

And such is this, an Oath is a religious Invoking of God *** in a lawful and very weighty Matter, whereby we appeal to...

An Oath is an appeal to God not only as a Witness of the Truth of what we say, but as an Avenger, if we speak not the Truth.

A Reflection on the Military Oath by Brian Bohlman

An oath is a form of a loyalty test, in that one swears or affirms to be faithful and committed to fulfill an obligation or...

The military oath is the legal document that requires service members to obey the orders of the president, a governor of a ...

Strasbourg, Oath of (842) An agreement between Charles the Bald and Louis the German, the Oath of Strasbourg solidified an alliance between the two kings during the civil wars following the death of Louis the Pious. Subscribed to by the two ...

Online dictionaries and encyclopedias with entries for Oath 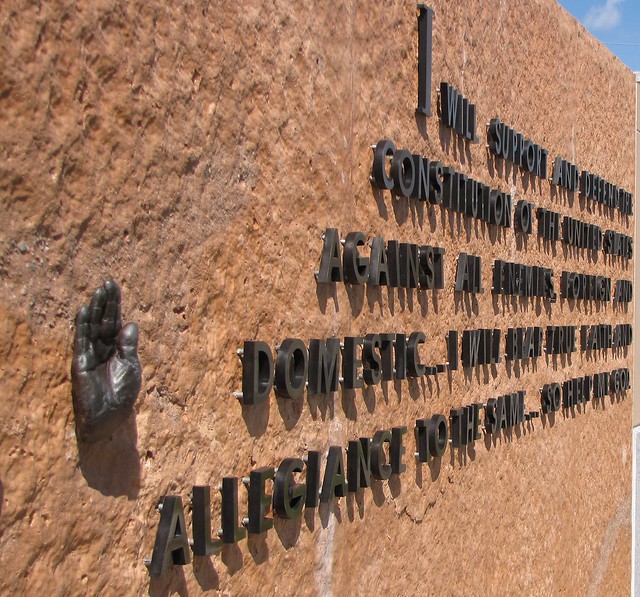 View more pictures about The Oath.

American Heritage Girls Oath in pidgin sign language so that the girls can sign along as they are saying the oath.

Helena: Weigh oath with oath, and you will nothing weigh. (William Shakespeare)
more quotes about oath...

See also the blanagrams of Oath!

Go to the usage examples of Oath to see it in context!