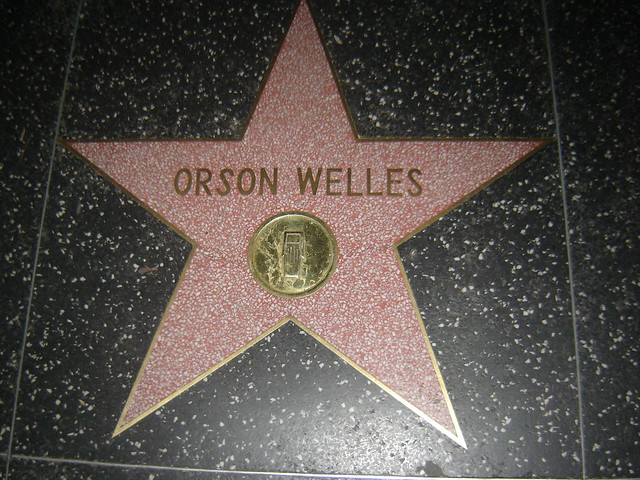 Who is Orson Welles?

Orson Welles: George Orson Welles was an American actor, director, writer and producer who worked in theater, radio and film. He is best remembered for his innovative work in all three media: in theatre, most notably Caesar, a groundbreaking Broadway adaptation of Julius Caesar; in radio, the 1938 broadcast "The War of the Worlds", one of the most famous in the history of radio; and in film, Citizen Kane, consistently ranked as one of the all-time greatest films.

"Orson Welles" is a book by Bret Wood.

Orson Welles is an impact crater in the Coprates quadrangle of Mars, located at 0.2° S and 45.9° W. It is 124.5 km in diameter and was named after Orson Welles, an American radio and motion picture actor and director. He is famous for, among other things, his radio broadcast of The War of the Worlds in which Martians invade Earth.

Printed dictionaries and other books with definitions for Orson Welles

An audience gathers for Part One; Cabrera Infante steps up to the podium and delivers it: “Orson Welles is a whale.

Literature, Film, and Their Hideous Progeny (2015)

Adaptation and ElasTEXTity by Julie Grossman

A metaphorical father figure to so many 70s “ragingbull” American filmmakers, Orson Welles is an absent presence in Hearts of Darkness as the misunderstood geniusartist figure Coppola aspires to be. As Biskind says, “Welles was venerated ...

Orson Welles WELLES, (GEORGE) ORSON York, and then decided to travel once.

Online dictionaries and encyclopedias with entries for Orson Welles

Gluttony is not a secret vice. (Orson Welles)
more quotes...

Go to the usage examples of Orson Welles to see it in context!