Definition of the noun poaceae

What does poaceae mean as a name of something?

Printed dictionaries and other books with definitions for Poaceae

A Review of the Production, Release, Distribution and Health Impacts by Mikhail Sofiev, Karl-Christian Bergmann

The taxon Poaceae is an amalgam of different species with varying ecology, mating systems and heating requirements, and thus, the curve can have several peaks (e.g. Gonzalez Minero et al. 1998). The second important factor is the specific ...

The Poaceae is a large and complex plant family that includes grain crops, many forage species ...

Poaceae is the most economically important plant family because 70% of all crops are salt-sensitive grasses. About 3.6 billion ha from 5.2 billion ha of the world's agricultural land is already salt-affected and not suitable for conventional crop ...

the family Poaceae is a very dense fibrous root system. This is particularly true of the upper layers of the soil and is one of the most striking features evident in root system drawings (Kutschera and Lichtenegger 1992). In addition to a ...

The family is called Poaceae by some authors but Britton and Brown use the nme Gramineae which term is used throughout this paper. A very large number of the Gramineae are cosmopolitan. There are upwards of 3,500 species, thus ...

Proceedings of the Oklahoma Academy of Science (1921)

by Oklahoma Academy of Science

The family is called Poaceae by some authors but Britton and Brown use the nme Gramineae which term is used throughout this paper. A very large number of the Gramineae are cosmopolitan. There are upwards of 3,500 species, thus ...

The Poaceae is a large and nearly ubiquitous family of monocot flowering plants.

The Poaceae is an important family of agricultural importance inasmuch as it includes staple food crops such as rice, maize, wheat, barley, and sorghum, as well as industrially important grasses such as switchgrass and Miscanthus that are ...

RYMV is present in the environment in rice stubble and regrowths and in wild Poaceae. 2. Rice seedbeds. Primary infection occurred via biotic transmission ( beetles, rats, cows) whereas cultural practices contribute to secondary infection in ...

Phragmitis australis (Poaceae), and Scirpus holoschoenus (Cyperaceae) may also be found in the desert. Aside from oases, wadis are the only habitats in the Sahara where trees and large bushes are ...

Poaceae. (order Poales) The grass family, known formerly as Gramineae; a very large and important family of *monocotyledons, most of which are *annual or * perennial herbs, but a few genera of which (e.g. the bamboos) are woody. From an ...

The name is derived from Gramineae (Poaceae, grasses). G. was the first alkaloid to be isolated from grasses and belongs to the class of indolylalkylamines (for biological activity, ...

Online dictionaries and encyclopedias with entries for Poaceae 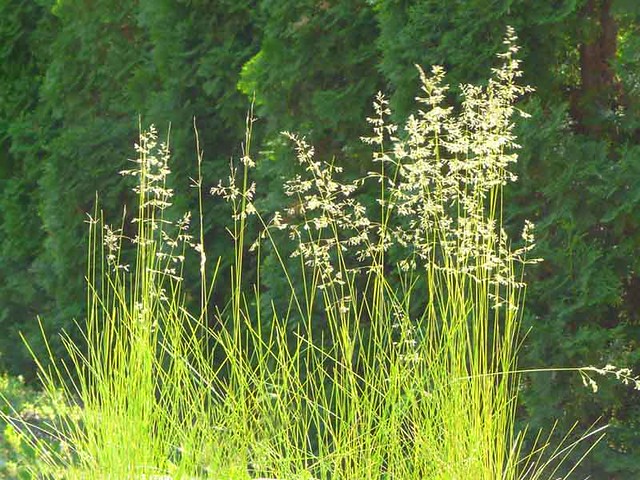 Go to the thesaurus of Poaceae to find many related words and phrases!