Distribution of usage frequency for the most common synonyms of the noun puddle:

Distribution of usage frequency for the most common synonyms of the verb puddle:

The word puddle is considered to be an easy one, according to the Dale-Chall word list, which includes 3000 words that all fourth-grade American students should know and understand.

Definition of the noun puddle

What does puddle mean as a name of something?

Alternative definition of the noun puddle

Specialised definition of the noun puddle

the water movement caused by the action of the oars. The size and shape of the puddle are indications of the amount of power put into the stroke

Definition of the verb puddle

What does puddle mean as a doing word?

Alternative definition of the verb puddle

"Puddle" is a book by David M. McPhail.

"Puddle" is a woodcut print by the Dutch artist M. C. Escher, first printed in February 1952.

Puddle: A puddle is a small accumulation of liquid, usually water, on a surface. It can form either by pooling in a depression on the surface, or by surface tension upon a flat surface. Puddles are usually formed from rain water or from irrigation.

Printed dictionaries and other books with definitions for Puddle

A Photographer's Guide to Shooting in Unconventional Locations by Nick Fancher

This time, a large puddle is the setting for this portrait. The shoot took place right after the sun ...

A puddle repeats infinity, and is full of light; nevertheless, if analyzed objectively, a puddle is a piece of dirty water spread very thin on mud. The two great historic universities of England have all this large and level and reflective brilliance.

Creating Outdoor Environments for Children and Youth by Sharon Stine

The adult-avoided mud puddle is a place to experiment with splashing. The adult's vista of a lush green hillside is for a child a place to roll down, feel the wet soft grass, smell its green smell, experience the free fall of tumbling round and round.

Seeing a car splashing through a puddle is a real visualisation ofthe speed. A car going down a straight dry road with no grass to be ruffled, no newspapers to fly up, no puddles to splash, and no means to gauge its speed, is less than dynamic ...

Puddle is a mixture of gravel and clay which is wet and rammed ...

Materials Blanket Paintbrushes Paper Mud puddle What to do 1. After a rainfall, when the weather has turned fair, bring a few blankets, paper, and paintbrushes outside and find a mud puddle. 2. Invite the children to find a spot on a blanket ...

SqāUT sm A puddle : 'ggå sn A small dubber or leathern bottle, (for oil, g,hee &c.) 2 A puddle, or a little pool. also a little pool. Sofi sm (c 5 5 P) Ausmall tamborine. SWITUT sm. One who recites the praises of the Deity, playing upon the sqī or ...

Online dictionaries and encyclopedias with entries for Puddle 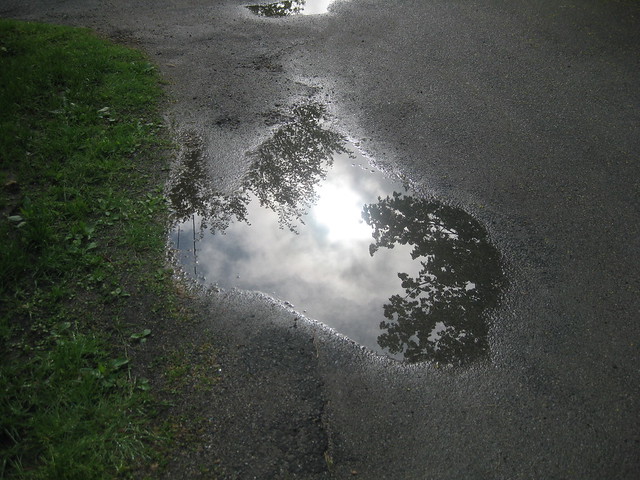 Video shows what puddle means. A small pool of water, usually on a path or road.. Stagnant or polluted water.. A homogeneous mixture of clay, water, and ...

Your baby can easily learn from you to sign Puddle. Learn how to teach your baby to sign Puddle {on the go} with ASL {without flashcards}. Post a video of your ...

You are so afraid of losing your moral sense that you are not willing to take it through anything more dangerous than a mud puddle. (Gertrude Stein)
more quotes about puddle...