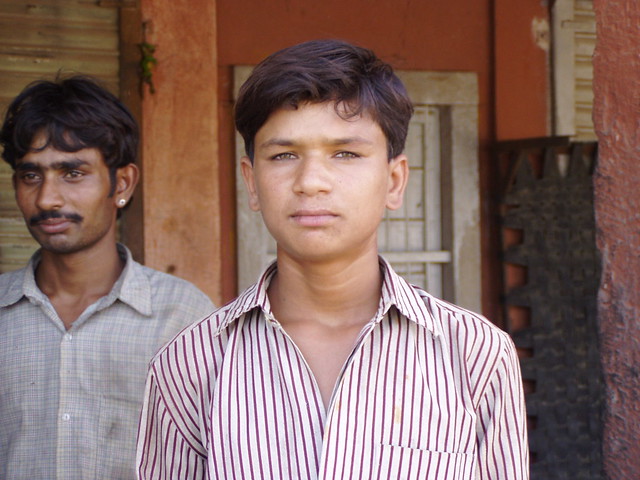 Rajasthan, is India's largest state by area. It is located on the western side of the country, where it comprises most of the wide and inhospitable Thar Desert and shares a border with Pakistan along the Sutlej-Indus river valley. Elsewhere it is bordered by other Indian states: Gujarat to the southwest; Madhya Pradesh to the southeast; Uttar Pradesh and Haryana to the northeast; and Punjab to the north. Its features include the ruins of the Indus Valley Civilization at Kalibanga; the Dilwara Temples, a Jain pilgrimage site at Rajasthan's only hill station, Mount Abu, in the ancient Aravalli mountain range; and, in eastern Rajasthan, the Keoladeo National Park near Bharatpur, a World Heritage Site known for its bird life. Rajasthan is also home to two national tiger reserves, the Ranthambore National Park in Sawai Madhopur and Sariska Tiger Reserve in Alwar.

"Rajasthan" is a book by Francis Wacziarg.

"Rajasthan" is a 1999 Telugu language film directed by R. K. Selvamani. The film features Sarathkumar and Vijayashanti in lead roles whilst Brahmanandam, Prakash Raj and Devan play supporting roles. The film was later dubbed into Tamil under the same name, with some scenes re-shot with local actors.

Printed dictionaries and other books with definitions for Rajasthan

A Study with Reference to Rajasthan by Om Prakash Joshi

Rajasthan is a semi-desert state in the north-western part of India. The big Thar desert stretches along its western part.

"Rajasthan is a vibrant and a progressive state within the Indian Republic. Major portions of its land surface were desert, inhabited sparsely by nomadic tribes whose main source of sustenance was through breeding cattle and manual labor .

The Tales of King Bharthari and King Gopi Chand as Sung and Told by Madhu Natisar Nath of Ghatiyali, Rajasthan by Ann Grodzins Gold

Rajasthan is a large state at the western edge of North India, on the border with Pakistan. With an area of 135,000 square miles and a population of more than thirty million, it encompasses a wide range of physical, agricultural, historical, and ...

Annual Analysis of Competitiveness, Simulation Studies and Development Perspective for 35 States and Federal Territories of India: 2000–2010 (2013)

Rajasthan is a mineral-rich state and considered a natural choice for mineral industries. It is a major producer11 of petroleum and gas, limestone, lead-zinc, copper, silver, gold, gypsum, rock phosphate and potash. Rajasthan is one of the ...

The present city of Bhinmal Rajasthan is a vry old city. In Treta Yug this city was called by name of Ratnamal. In Dwapar Yug it was named as Swarnamal and at the time of Lord Mahaveera, ...

The Women's Development Program in Rajasthan (1992)

Rajasthan Is an economically backward state in northwest India. Extending over an area of 342. < thousand square kilometers, it has a population of 34.26 million. Eleven out of its twenty- seven ...

Rajasthan is a peaceful state but it grapples with the predicament of border patrolling in the long international border of 1,040 km.

Rajasthan is a land of superlatives where everything is breathtakingly fascinating . The state harbors a wealth of mesmerizing palaces and invincible forts of the erstwhile rulers and Maharajas, magnificent heritage havelies (palatial houses of ...

Foreign tourists getting married as per Hindu rituals in Rajasthan is a common thing. But one such couple, who kissed each other during the ceremony, has created ripples in the holy Pushkar, with local priests lodging a FIR ...

Introduction Rajasthan is a segment of the western Indian craton. A significant feature of this craton is the development of multiple Proterozoic fold belts that are ingrained in reworked basement complex containing Archean crustal ...

RAJASTHAN. N.L. Agravval and Narendra Singh India is a major producer and exporter of coriander, cumin, fennel, fenugreek, celery and dill seed spices. These seed spices in our country occupied an area of 5.16 lakh hectares with a ...

Fortresses such as Chitor, numerous palaces, a variety of nomadic pastoral communities, colorful festivals, and unusual social customs that are the legacy of the past combine with spectacular landscapes to make Rajasthan a favored ...

Encyclopaedia of Primitive Tribes in India (2004)

Bihar, Maharashtra, Rajasthan and Delhi with the assistance of the Ministry of Welfare, Government of India. The number of persons trained in trades like Tailoring, Mechanics (Diesel and Motor), Typing, Driving, Manufacturing of Cane ...

Online dictionaries and encyclopedias with entries for Rajasthan

Couldn't select: You have an error in your SQL syntax; check the manual that corresponds to your MariaDB server version for the right syntax to use near 'Rajasthan"" IN BOOLEAN MODE) LIMIT 1,1' at line 1

Go to the usage examples of Rajasthan to see it in context!