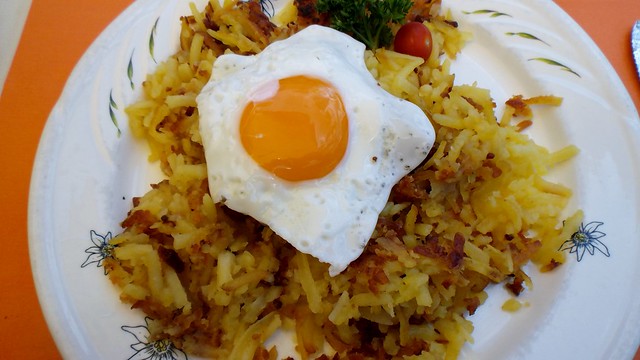 Rosti a.k.a. Rösti or röschti is a Swiss dish consisting mainly of potatoes. It was originally a common breakfast eaten by farmers in the canton of Bern, but today is eaten all over Switzerland and also in many restaurants in the western world. Many Swiss people consider rösti a national dish. Today, rather than considering it a complete breakfast, it is more commonly served to accompany other dishes such as "Spinat und Spiegelei", cervelas or Fleischkäse. It is also a dish one can order in most restaurants to replace the standard side dish of any given meal.

Rosti is a fictional character from the 2013 film Massive Orange Head.

View more phrases with the word Rosti in thesaurus!

Printed dictionaries and other books with definitions for Rosti

Rosti is a Swiss potato dish. A raclette with cheese, is that way. Roti is Indian unleavened bread. Rillettes is a goose or pork paté. Rusk is a crisp ...

A rosti is a Swiss dish traditionally made with potatoes. This version uses a sweet and nutty combination of quinoa and sweet potatoes that has a low glycemic index to keep you going longer. PREPARATION 30 MINUTES COOKING 45 ...

Rosti is a crusty potato pancake that is a popular Swiss farmhouse breakfast. It makes a wonderful side for raclette and cheese or meat fondues. To make rosti, cook unpeeled, waxy boiling potatoes (one per person) in boiling, salted water until ...

Rosti is a famous Swiss style of potatoes then some fondue somewhere else, and then tandoori chicken at a third place. The best restaurant here is the dark, cozy Swiss Cheese Garden, filled with red check and brick, with good raclette, ...

An Edition of All Extant Manuscripts by Taillevent, Terence Scully

The dish Pore rosti is an appropriate choice to open this chapter since, according to contemporary medical doctrine, cold and moist meats should be roasted ( rather than boiled, fried or 1 pore is clearly written port by VAT. baked),2 and since ...

MUSHROOMS Serves 4 to 6 Rosti is a favorite Swiss potato dishmade with grated potatoes and, depending on the cooking technique (deep- frying, pan- frying oreven baking), butter,oil, ora combination. It can be formed into onelarge cake, ...

Secrets of the Seven Smallest States of Europe (2005)

There are four interesting starch dishes: rosti, hafalab, kasknopfle, and kratzete. Rosti is a potato dish in the shape of a pancake, and kratzete are flour pancakes. Hafalab and kasknopfle are types of dumplings. Liechtenstein has no seacoast, ...

Many of the earliest Egyptian films were made by filmmakers of Italian origin, such as the Egyptianborn Stephane Rosti, who directed Layla in 1927. This film's position as the first full-length Egyptian feature has recently been challenged by ...

industry in Egypt,suchas the Greek-born Omar Sharif and the Hungarian Stephan Rosti. Middle Eastern royalty and other members of the elite were attracted by the high standards of education provided at Alexandrian schools suchas ...

The system combination (Rosti etal. 2007: 228–235) approach takes one or more outputs from each system and merges these results in a word, phrase or sentence level. Pipelined approaches adopt one system as the main system and ...

Online dictionaries and encyclopedias with entries for Rosti