Definition of the noun sahib

What does sahib mean as a name of something?

Sahib is the son of film director Amar Kaleka.

There are other characters with in their name, like Rai Sahib and Nawab Sahib.

"Sahib" a.k.a. "Sahib: The British Soldier in India" is a book by Richard Holmes.

Sahib is a name of Arabic origin meaning "holder, master or owner." It has passed on to several languages including Urdu, Hindi, Punjabi, Bengali, Gujarati, Pashto, Turkish, Marathi and Kannada. It has also entered English, as a loanword especially associated with British rule in India.

Printed dictionaries and other books with definitions for Sahib

The Guru Granth Sahib is the epitome of the spiritual teachings of Sikhism.

Gurbani, is the key to Shri Guru Granth Sahib is a source book, an expression The Sikh Grand Narrative 5.

Jaap Sahib is an introduction to the understanding of the nature of the Creator. The glories sung...

Jaap Sahib is a meditation upon the description of these names, illustrated by the opening verse, ' You have no form or feature, No caste or 133.

Sahib is a magnificent history of the British soldier in India from Clive to the end of Empire, making full use of personal accounts from the soldiers who served in the jewel in Britain’s Imperial Crown.

The Darbar Sahib is a large, square structure where Guru Tegh ...

Jaap Sahib is an introduction to God. The glories sung (composed) by Guru Gobind Singh revolve around the following attributes of God: Godis metaphysical, beyond time, Eternal, Unborn, not created, Selfexistent, and without form, feature, ...

Memoirs of a Survivor of the 1947 Partition of India by Bal K. Gupta

Guru Granth Sahib is the holy book for Sikhs.

The Granth Sahib is the central object of Sikh worship and ritual. In all Gurdwaras , copies of the Granth are placed under a canopy. The book itself is draped in cloth, usually richly embroidered. It is opened with prayer and ceremonial each ...

Administrative Aspects of Tourism: A Case Study of Punjab (2013)

Anandpur Sahib is an important Sikh religious center in the backdrop of the Naina Devi Hills. It is situated 41 kilometres from Rupnagar on the left bank of river Sutlej. It has a number of historical Gurudwaras. These Gurudwaras are important ...

The Guru Granth Sahib is the holy book which was prepared by one of the Gurus. Sikhs believe people should meet together. They meet for religious, social and educational activities at the gurdwara. The gurdwara is the Guru's court where ...

“Budge Sahib is an honest man,” declared the Vakil. “You've got a strong case, man," affirmed McBean. DeSouza tipped the square bottle over the D. A. M.'s glass, but not a murmur of gurgling gin sounded from its nozzle. The magistrate put a ...

Budge Sahib is an honest man," declared the Vakil. "You've got a strong case, man," affirmed McBean. DeSouza tipped the square bottle over the D. A. M.'s glass, but not a murmur of gurgling gin sounded from its nozzle. The magistrate put a ...

In the 1740s and 1750s, an inter-dynastic struggle between the Navayat warlord Chanda Sahib and Muhammad Ali Wallajah for control of the Carnatic region of south central India became entangled with the Anglo-French Wars. Joseph ...

The mystical "voice" of Akal Purakh is the Guru, appearing in human form as the 10 historic Gurus and embodied thereafter in the sacred scripture that becomes the Guru Granth Sahib. Each of the Gurus taught the supremely important nam, ...

The Hindoostanee Interpreter, Containing the Rudiments of Grammar, an Extensive Vocabulary and ... Dialogues; 2 Ed. to which is Added a Naval Dictionary .. by Thomas Roebuck (1841)

The Guru Granth Sahib, also known as the Adi Granth, is a compilation of Sikh sacred scriptures. The honorific Sri (Holy) is often added to the title. “Granth” is derived from the Sanskrit word grantha, meaning “book,” while “Sahib” is a term of ...

The Harmandir Sahib, or the Golden Temple, ...

A Popular Dictionary of Sikhism (2005)

of the Darbar Sahib from the government during the agitation for control of gurdwaras in the early nineteen twenties. On 16 November 1920, a representative body of Sikhs ...

Online dictionaries and encyclopedias with entries for Sahib 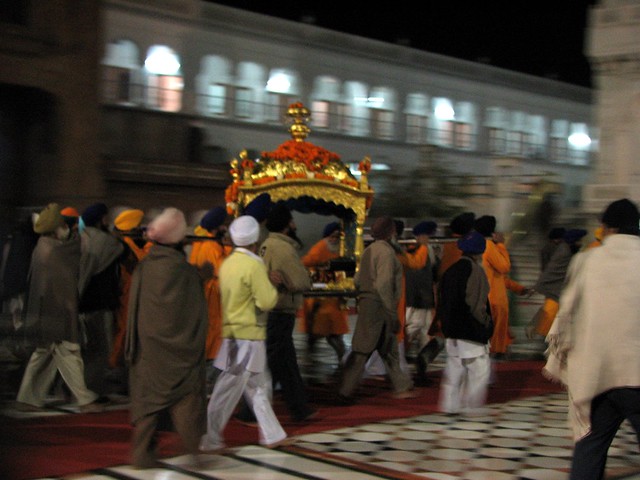