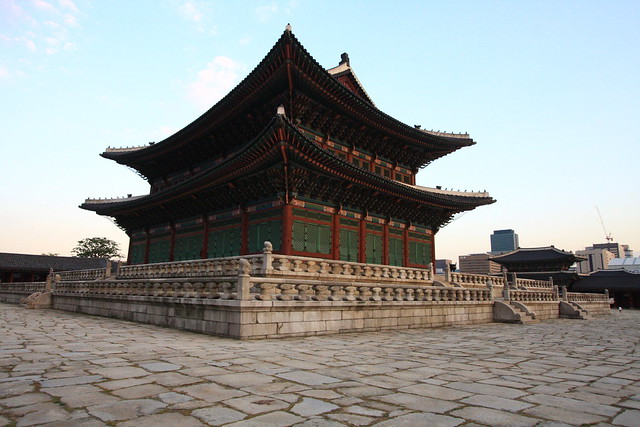 Seoul — officially the Seoul Special City — is the capital and largest metropolis of South Korea, forming the heart of the Seoul Capital Area, which includes the surrounding Incheon metropolis and Gyeonggi province, the world's second largest metropolitan area with over 25.6 million people. It is home to over half of South Koreans along with 632,000 international residents. With a population of over 10 million, the megacity is the largest city proper in the OECD.

"Seoul" is a book by Joochul Kim.

Printed dictionaries and other books with definitions for Seoul

Dwight Seoul is a member of the Dwight Family of Schools, with campuses and programs in New York, USA; London, UK;

Following the tradition of its sister campuses, Dwight Seoul is a candidate International Baccalaureate World School, ...

Seoul is a teeming metropolis and is an economic force that is pummeling the world markets with its guile. On the northern edge of The DMZ is North Korea. North Korea is a fortress of Hades. Its citizens are held in barbaric captivity.

Yet Seoul is a young metropolis still in the making. More than half of the city's ten million inhabitants live and work in districts that used to be paddy fields and orchards only a generation ago. Even older districts have gone through an extensive ...

Even though Seoul is a huge city, South Koreans are inevitably very gracious and helpful to foreign visitors. (Courtesy of Mary Connor) 65 Precolonial Influences through Japanese Occupation: 1876–1945 In the nineteenth century.

Seoul is a modern city and an historic one all rolled together.

Kubo's flaneuring through contemporary Seoul is an illicit reading of Pak's unseen text, one that makes it visible. As Kubo conjures up the excised history and literary production of Pak T'ae-wo ̆n, a prominent writer in contemporary ...

Seoul is an ancient city, substantially destroyed during the Korean War, that has been built again as a new city. South Korea has only come to the fore as an industrialised nation in the last 30 to 40 years, and so a new airport – and a city built ...

Like Tokyo and Taipei, Seoul is a city of large screens. Since the 1960s, South Korea has adopted an open door policy that has led to a high exportdriveneconomic growthin the 1990s. In particular, it has quickly developed digital technology ...

The Reading and Preaching of the Scriptures in the Worship of the Christian Church, Vol. 7 (2010)

Our Own Time by Hughes Oliphant Old

Seoul is a very modern, burgeoning city with steel and glass skyscrapers beautifully landscaped by traditional Oriental gardens and tastefully placed pagodas and pavilions that make one realize that one is indeed in Asia, not in New York or ...

SEOUL. 1988. Ron. Palenski. THE. GAMES. OF. THE. TWENTY-FOURTH. OLYMPIAD. Throughout the 1980s, the international Olympic Movement underwent such a profound change that even the semiofficial biography of the International ...

Historical Dictionary of the Eisenhower Era (2008)

by Burton I. Kaufman, Diane Kaufman

Seoul surpassed all its predecessors. It helped, of course, that the Olympic world was united for the first time since Munich in 1972, just six national Olympic committees choosing not to attend. North Korea (officially, the Democratic People's ...

Dictionaries. An International Encyclopedia of Lexicography (2014)

Online dictionaries and encyclopedias with entries for Seoul

Couldn't select: You have an error in your SQL syntax; check the manual that corresponds to your MariaDB server version for the right syntax to use near 'Seoul"" IN BOOLEAN MODE) LIMIT 1,1' at line 1