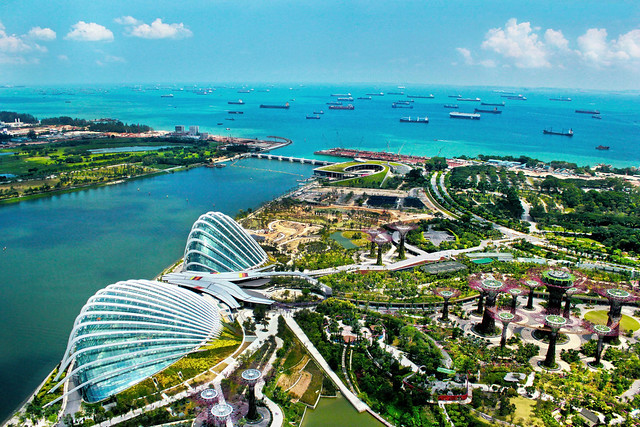 Singapore, officially the Republic of Singapore, is a sovereign city-state and island country in Southeast Asia. It lies off the southern tip of the Malay Peninsula and is 137 kilometres north of the equator. The country's territory consists of the lozenge-shaped main island, commonly referred to as Singapore Island in English and Pulau Ujong in Malay, and more than 60 significantly smaller islets. Singapore is separated from Peninsular Malaysia by the Straits of Johor to the north, and from Indonesia's Riau Islands by the Singapore Strait to the south. The country is highly urbanised, and little of the original vegetation remains. The country's territory has consistently expanded through land reclamation.

Singapore a.k.a. Singapore Airlines Limited is the flag carrier of Singapore which operates from its hub at Changi Airport and has a strong presence in the Southeast Asia, East Asia, South Asia, and "Kangaroo Route" markets.

Singapore is a single by Polish band 2 Plus 1, released in 1980, also known as "Singapore Dreams".

Printed dictionaries and other books with definitions for Singapore

Social Stratification and Orientations in Singapore by Ern Ser Tan

"Singapore is a good place to make ...

Singapore is an exemplar of what is happening in Asia and it is difficult to see either Europe or North America matching...

Singapore is an island country off the southern tip of the Malay Peninsula, in Southeast Asia.

Singapore is a multi-religious and a multi-linguistic country, with no official religion and four official languages (English, Mandarin, Malay and ...

Letters and Stories by Mick Sutton

SINGAPORE AND oNWARDs Indian sea Dear Fiona, Singapore is a big city, and Singapore is an independent nation—it has no big country—just the city. The city- state has <an> area of about 245 square miles. In this it was like the city-states ...

Singapore is an open economy, with very few applied tariffs and an investment regime that actively promotesforeign inflow of both human and financial capital. Singapore is an active member of the WTO, a leading force in the Association of Southeast Asian Nations (ASEAN), and has...

Theatre and Performance in the Asia-Pacific (2013)

Singapore is a historical product of the nineteenth-century global flows. While it has in recent decades re-inscribed itself as a postmodern economy dependent on the commodification of culture, high-rise New York-style structures are the ...

Singapore is a small, island country immediately south of the Malay Peninsula and north of Indonesia's Riau Islands. The population lives in urban conditions, almost entirely on the largest island. With fewer than 5 million people, including ...

The Rough Guide to Southeast Asia On A Budget (2010)

The Portable Encyclopedia for Doing Business with Singapore by Christine Genzberger

Singapore is an open market and a free port — by some measures, the largest port in the world. The city-state is located at the...

Singapore is a 244 square mile island off the southern tip of Malay Peninsular. Singapore is a busy seaport island halfway between India and China, making it an excellent trading center. It was a colony of England and the residence of the ...

Singapore is a commercial society, and it is not surprising that government companies behave in a commercial way. Furthermore, the honesty...

Pentecostal Theology for the Twenty-First Century (2013)

Engaging with Multi-Faith Singapore by Ms May Ling Tan-Chow

The harmonious coexistence in a heterogeneous culture is due to the fact that Singapore is a highly controlled and structured nation. Singapore is the combination of a strong government and a business-oriented culture. History: Singapore ...

ANDREW DAY SHARON CASEY Introduction Contents Introduction 159 Discussion 165 References 168 Singapore is a small but densely populated country, with a resident population of just over 5 million people. It is near the equator, ...

Singapore is a small and overcrowded island with extremely pricey real estate. It would be difficult to save much money and live in a reasonable manner unless you had an “expat job”. Singapore is an incredibly entrepreneurial city and ...

Singapore is an island that sits off the coast, very close to, but not on, Malaysia. Despite its economic importance, Singapore is a very small piece of land, and like Monaco or Brunei, it is com sidered a microstate. Although Singapore was once ...

Singapore is an island republic between Malaysia and Indonesia, and while it is only one area of outstanding penjing development, it is by no means the only area where quality and excellence ...

Alternative Names Chinese Singaporeans, Singaporean Chinese. Location Singapore is a small island, of about 685 km2, situated at the southern tip of the Malayan Peninsula. Located just above the equator, it is surrounded by Malaysia to its ...

Singapore Zoological Gardens, with an area of 222 acres (90 hectares), is located near the Seletar Reservoir. Zoo visitors have a clear view of the natural rain forest beyond, and exhibits are presented in environments that approximate the ...

SINGAPORE VERSUS AUSTRALIA In 1982, Balla observed that while whiplash patients in Australia ...

Encyclopedia of Internet Technologies and Applications (2007)

Encyclopedia of Portal Technologies and Applications (2007)

Online dictionaries and encyclopedias with entries for Singapore

Even in a society as tightly controlled as Singapore's, the market creates certain forces which perhaps in the long run may lead to democracy. (Peter L. Berger)
more quotes about singapore...