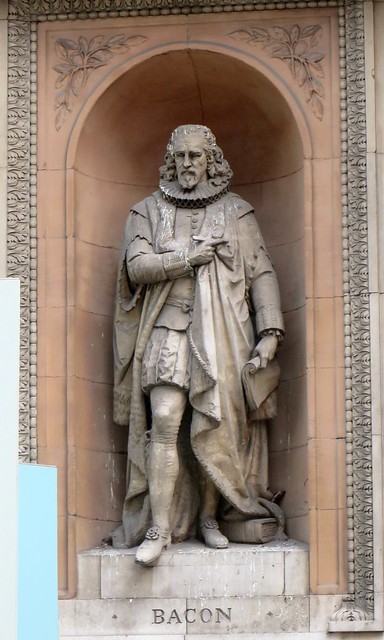 Who is Sir Francis Bacon?

Sir Francis Bacon a.k.a. Francis Bacon, 1st Viscount St. Alban, QC, was an English philosopher, statesman, scientist, jurist, orator, essayist, and author. He served both as Attorney General and Lord Chancellor of England. After his death, he remained extremely influential through his works, especially as philosophical advocate and practitioner of the scientific method during the scientific revolution.

Sir Francis Bacon is a fictional character from the 2006 film Secret Mysteries of America's Beginnings Volume 1: The New Atlantis.

"Sir Francis Bacon" is a book by Jean Overton Fuller.

Printed dictionaries and other books with definitions for Sir Francis Bacon

Encyclopedia of Literature and Science (2002)

Sir Francis Bacon (1561– 1626), engraved by James Posselwhite. Figure B.4 Graphical representation of bacteriorhodopsin as part of the.

The Manual of Dates: a Dictionary of Reference to All the Most Important Events in the History of Mankind to be Found in Authentic Records (1862)

Online dictionaries and encyclopedias with entries for Sir Francis Bacon

Go to the usage examples of Sir Francis Bacon to see it in context!