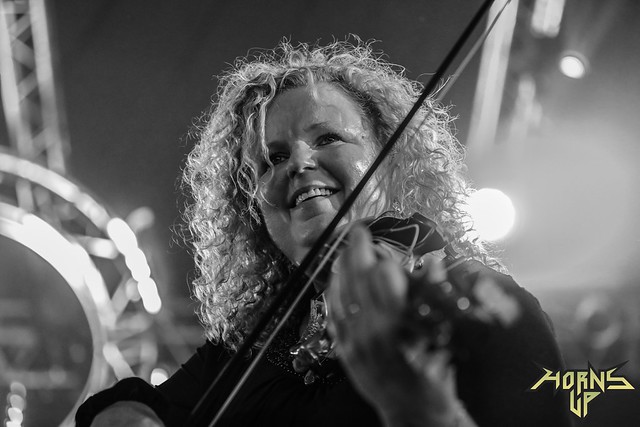 Definition of the adjective Skyclad

What does Skyclad mean as an attribute of a noun?

Skyclad are a British heavy metal band with heavy folk influences in their music. They are considered one of the pioneers of folk metal. The etymology behind the term "skyclad" comes from a pagan/wiccan term for ritual nudity, in which rituals are performed with the participants metaphorically clad only by the sky, as a sign of equality. The name alludes both to the bands' religious leanings and to their social beliefs, as set out in the song "Skyclad" on their first album.

Skyclad is a record label.

Skyclad: In Wicca and Paganism/Neo-paganism, the term skyclad is used to refer to ritual nudity. Some Wiccan groups, or Traditions, perform some or all of their rituals skyclad. Whilst nudity and the practice of witchcraft have long been associated in the visual arts, this contemporary ritual nudity is typically attributed to either the influence of Gerald Gardner or to a passage from Aradia, or the Gospel of the Witches, and as such is mainly attributed to the Gardnerian and Aradian covens.

Printed dictionaries and other books with definitions for Skyclad

Going skyclad is a feature of one at least of the eight annual festivals for which Gardner provided modern prescriptions, namely, Beltane. Beltane is the modern version of the May Day celebrations of medieval times and is the one most ...

Going skyclad is a particularly visible and vibrant example of this, and having the appropriate policies and procedures in ...

How the Human Family Meets Its Spiritual Needs by Thomas W. Shepherd

Every year for nearly three centuries, a skyclad village maiden (elected Queen of the May) enacted this Pagan rite, until the Puritans put an end to the custom.16 Skyclad is an anthropological euphemism for totally nude. The skyclad lifestyle is ...

A Witch's Approach to Living the Old Ways by Edain McCoy

Going skyclad is a personal choice, and it should not be made mandatory, especially since there is little or no evidence to suggest that this was common practice in ancient paganism. Gerald Gardner got the idea from an Italian monograph ...

To go skyclad is one ritual clothing option (or, perhaps more properly said, ritual unclothing option) for Pagans. Literally, skyclad means "clothed in the sky," or, put differently, nude. Although this term appears in the writings of Gerald Gardner , ...

The Encyclopedia of Magickal Ingredients (2005)

A Wiccan Guide to Spellcasting by Lexa Rosean

RULER: God, Goddess TYPE: form of practice MAGICKAL FORM: the body Going skyclad, or naked, in Wiccan rites is a sign that you are truly free. Some covens are robed, some are naked underneath the robes, and some are completely ...

skyclad Euphemism for ritual nudity. The term may have derived ...

Skyclad (Nudity) Jill Y. Crainshaw The term “skyclad” refers to ritual nudity as it is practiced in contemporary forms of Wicca or in paganism and neo-paganism. Some practitioners trace late-20th- and early-21stcentury forms of ritual nudity to ...

One of the most important single points of Gardnerian practice is the fact that Gardnerians worship skyclad. That means that all one wears into the circle is jewelry. Nudity within the ritual circle is helieved to free one from the ahility of clothing to ...

Within modern witchcraft, or Wicca, certain groups perform some rituals nude ( skyclad, as it is often termed). This is thought to reduce inhibitions within the group and promote the flow of magical energies. Some critics of Wicca, however, fixate ...

A Dictionary of World Mythology (1986)

Naked, digambara, 'skyclad', ethereal, the saint's posture is of an ascetic superman whose consciousness is anchored on things above the concerns of men or gods. Jainism pictures the universe as a giant human figure: either male or female.

The Oxford Dictionary of Philosophy (2016)

Its practice demands a monastic life of extreme austerity; for example, one sect is the Digambara or 'skyclad', perhaps identical with the gymnosophists (Greek, naked + wisdom) ...

Online dictionaries and encyclopedias with entries for Skyclad

The value of this 7-letter word is 17 points, but it's not an accepted word in the Official Scrabble Players Dictionary.