Definition of the noun sporobolus

What does sporobolus mean as a name of something?

Phrases starting with the word Sporobolus:

Phrases ending with the word Sporobolus:

View more phrases with the word Sporobolus in thesaurus!

Printed dictionaries and other books with definitions for Sporobolus

The Sporobolus is a prolific seed bearer, and the seeds are eaten by many small birds. They ripen at various times of the year, but principally in the summer and autumn months. There is a variety (par elongatus) of this grass with narrower ...

The Hot-house and Greenhouse Manual, or botanical cultivator ... Second edition (1831)

2' Y 4 SPoRoBoLUs is a genus of the Grasses: it may be ANNUALS AND BIENNIALS.

The Sporobolus is a prolific seed bearer, and the seeds are eaten by many small birds. They ripen at various times of the year, but principally in the summer and autumn months. There is a variety (var. elongatus) of this grass with narrower ...

SPOROBOLUS is a genus of the Grasses: it may be raised on a gentle hot-bed, and transplanted into the open ground. STACHYS belongs ...

The Ethnobotany of Pre-Columbian Peru (2017)

SPOROBOLUS R. Br. Vilfa Beauv. Sporobolus is a genus consisting of about 100 species of annual and perennial grasses with narrow blades. These grasses are found in warm regions of both hemispheres. Six species are reported for Peru ...

Manual of Grasses for North America (2007)

Sporobolus is a cosmopolitan genus of more than 160 species that grow in tropical, subtropical, and warmtemperate regions throughout the world. Seventyfour species are native to the Western Hemisphere; 27 are native to the Manual region, ...

INTRODUCTION Sporobolus is a subcosmopolitan genus and one of the largest genera of the tribe Eragrostideae. It is found mostly in tropical and subtropical areas of the world: widely throughout Africa (73 spp.), North America (45 spp.) ...

Sporobolus is a genus including a number of species, more or less common, but none of sufficient recognized importance to have received familiar names. Sporobolus heterolepis, a valued grass on the western prairies, is found as far east as ...

Achuku, Sporobolus pyramidalis (Gramineae or Poaceae) see fig. 9. A tufted perennial, 60-120 cm high. Common in grassland, in bush and along the forest edges. USE: Low grazing value because of its toughness.

Online dictionaries and encyclopedias with entries for Sporobolus 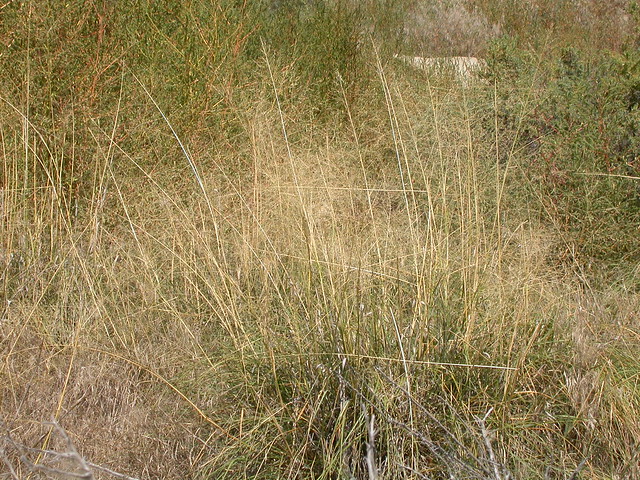 Native, warm-season, perennial, erect, tufted grass to 1.2 m tall. Stem bases are rounded. Leaves are hairless (except along their basal margins). Flowerheads are sparse, narrow, contracted panicles to 40 cm long; branches are short, stiff and pressed against the main stem (which is visible for most of its length). Spikelets are about 1.5 mm long, 1-flowered and dark coloured. Flowering is from late spring to autumn. Found in native pastures and woodlands on low fertility, lighter soils, but rarely dominant. Less common in old naturalised pastures. Palatability and digestibility are moderate for young growth, but low otherwise. Very low yielding and provides no economic response to fertiliser. Favoured by set stocking due to its low palatability.