Tart appears in many palindromes (phrases that read the same backward as forward):

Distribution of usage frequency for the most common synonyms of the noun tart:

Tart is sometimes a misspelling of dart.

Definition of the noun tart

What does tart mean as a name of something?

Alternative definition of the noun tart

Definition of the adjective tart

What does tart mean as an attribute of a noun?

Alternative definition of the adjective tart

Definition of the verb tart

What does tart mean as a doing word?

Tart: A tart is a baked dish consisting of a filling over a pastry base with an open top not covered with pastry. The pastry is usually shortcrust pastry; the filling may be sweet or savoury, though modern tarts are usually fruit-based, sometimes with custard. Tartlet refers to a miniature tart; an example would be egg tarts. Examples of tarts include jam tarts, which may be different colours depending on the flavour of the jam used to fill them, and the Bakewell tart.

"Tart" is a musical album of Lovebugs.

There are other characters with in their name, like Egg tart and Raspberry Tart.

Tart is a consumer product.

Phrases starting with the word Tart:

Phrases ending with the word Tart:

Printed dictionaries and other books with definitions for Tart

The 1,001 Most Common Crossword Answers by Stanley Newman

TART THE ADJECTIVE "Tart" can mean sour or sharp in the edible sense (with clues like "Lemony" and "Vinegary"], or in the sense of speaking (with clues like " Barbed." "Cutting," and "Snippy"). THE NOUN As a noun, a tart is a small pie or ...

Quelbe Tart [kwelbey tahrt] Noun1. a pastry taking a half moon shape containing sweet fillings like coconut, pineapple and guava which are ...

See also JAM TART. jambalaya A paella-like Cajun dish from Louisiana, US. It consists of rice cooked with a variety of other ingredients including shrimps, sausage, chicken, and ham, seasoned with chilli powder and cayenne. The word is ...

Quince Tart PIES, E.T.C. Rhubarb Tart pinch of grated lemon-peel. , Moisten the edges, cover the dish with pastry, and bake in a moderate oven. Sift a little powdered sugar over the pie before sending it to table. Time to bake, according to size.

Encyclopaedia Metropolitana; or, universal dictionary of knowledge, on an original plan: comprising the twofold advantage of a philosophical and an alphabetical arrangement, with appropriate engravings (1845)

TART. TATTLE. TAVER- N1ERA. may be Fischer's T. Fuscomanus. The animal is found in Amboina, Banea, and Madagascar, and is known to the Malays by the name Podje. It is very rare in Sumatra, and only in the deepest woods ...

Online dictionaries and encyclopedias with entries for Tart 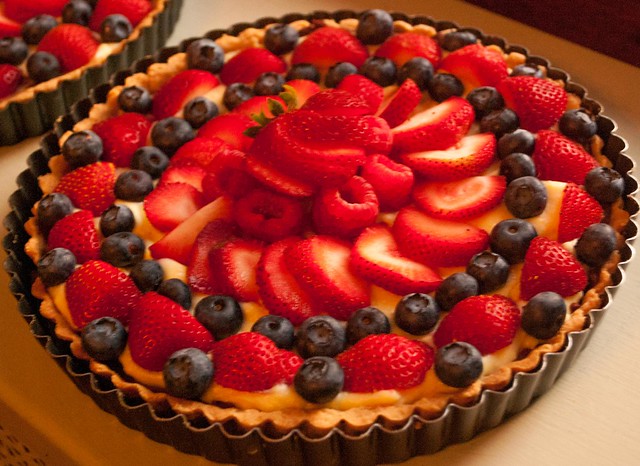 A gourmet who thinks of calories is like a tart who looks at her watch. (James Beard)
more quotes about tart...