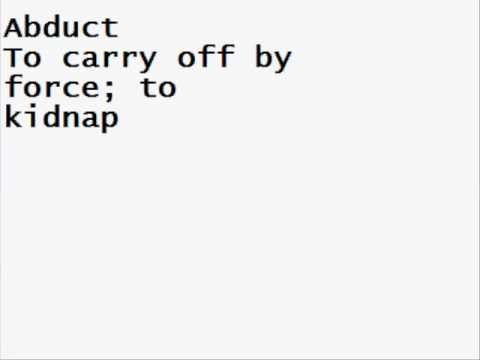 Definition of the verb abduct

What does abduct mean as a doing word?

Alternative definition of the verb abduct

Definition of the verb abduct for high school students

to kidnap, take by force

The verb abduct is considered to be a word that all college-aspiring students should know and understand, so it frequently appears on the SAT, ACT and other college admissions tests.

Specialised definition of the verb abduct

Printed dictionaries and other books with definitions for abduct

Abduct. To abduct means to move a part of the body – for example, a limb – away from the mid line. (Opposite: ADDUCT.) Ablation. Ablation means the removal of any part of the body by a surgical operation. Abnormal. A structure or process ...

Giving the Pronunciation and Definition of about 12,000 of the Principal Words Used in Medicine and the Collateral Sciences ... by George Milbry Gould

arm- abduct! R. thigh-abduct! Etc. 4. Description of Exercise. The simple movements have been described. The leg and arm movements are executed simultaneously.

The words abduct and kidnap derive from borrowed Latin and Scandinavian words stems. The first recorded uses of kidnap in the English language appear in the seventeenth century, while abduct appears in the nineteenth century. Today ...

It acts to abduct and rotate the thigh. The gluteus minimus originates between the inferior and anterior ...

It acts to abduct and rotate the thigh. Gluteus minimus originates between the inferior and anterior gluteal ...

Online dictionaries and encyclopedias with entries for abduct

Distribution of usage frequency for the most common synonyms of the verb abduct:

If you need images about abduct for an article or a report, you can download stock photos at a very small price:

Couldn't select: You have an error in your SQL syntax; check the manual that corresponds to your MariaDB server version for the right syntax to use near 'abduct"" IN BOOLEAN MODE) LIMIT 1,1' at line 1

Go to the usage examples of abduct to see it in context!